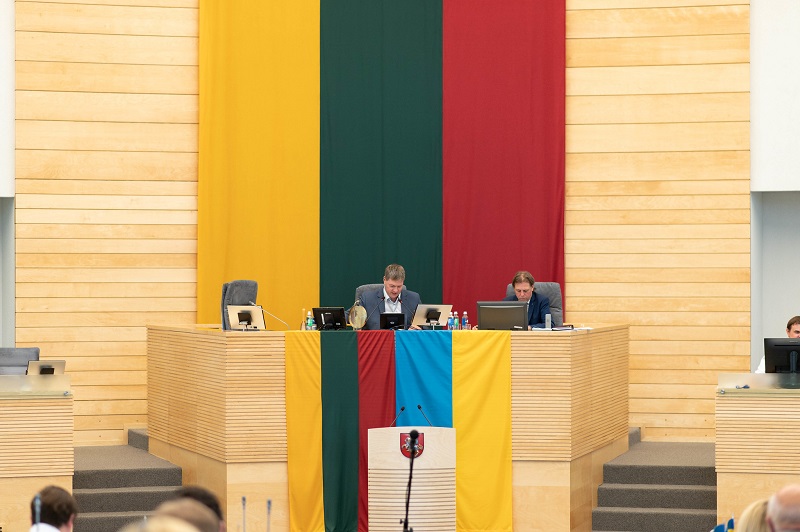 The receiver of the bankrupt Lithuanian bank Snoras and the Swiss bank Julius Baer & Co. Ltd have amicably settled a legal dispute concerning the financial transactions carried out by the former managers and shareholders of Snoras when they transferred from large sums of money to foreign banks. According to the signed agreement, Julius Baer & Co Ltd will pay 105 million euros to Snoras, the bank announced on Friday July 1st. Gintaras Adomonis, the administrator of Snoras, says the out-of-court settlement marks the end of a very important step in the old bank’s bankruptcy process.

Lithuanian border guards turned back, on Thursday June 30, six migrants trying to enter the country illegally from Belarus, the National Border Guard Service (SBGS) announced on Friday July 1. Lithuanian border guards have returned more than 10,300 people to Belarus since last August, when they won the right to refuse entry to irregular migrants. However, this number includes repeated attempts by the same people to cross the border. Nearly 4,200 irregular migrants entered Lithuania illegally from Belarus last year.

The President met with the King of Spain Felipe VI

Lithuanian President Gitanas Nausėda met Spain’s King Felipe VI on Thursday (June 30th), while the president was attending the NATO summit in Madrid, the presidential press service said. The meeting focused on bilateral relations between Lithuania and Spain and the prospects for their development, as well as Russian military aggression in Ukraine and its implications for security in Europe. The Lithuanian President thanked Spain for its constant contribution to strengthening the security of Lithuania and the Baltic region, in particular for its role in the NATO Air Policing Mission in the Baltic. The President invited King Felipe VI to visit Lithuania on the occasion of the centenary of the establishment of diplomatic relations between Lithuania and Spain.

Revolut Bank has received approval to increase its authorized capital from 5.5 million euros to 36.8 million euros, the Central Bank of Lithuania announced on Friday (July 1st). The central bank’s Financial Markets Supervisory Committee took the decision after evaluating the application and information submitted by Revolut Bank, allowing the company to register the amendment to the bank’s articles of association relating to its capital increase. authorized. From July, Revolut Bank will also start providing the services that have until now been provided by another company in the group, the electronic money institution Revolut Payments.

Lithuania attracted 15 new foreign investors in the first half of this year, and another 16 have expansion plans, Investuok Lietuvoje (Invest Lithuania), Lithuania’s foreign investment promotion agency, said on Thursday, June 30. . The new investments attracted over the six months will create more than 3,000 jobs, which shows that Lithuania remains competitive in attracting foreign investment, said the head of the agency, Elijus Čivilis.

Lithuania’s Supreme Court on Thursday (June 30) rejected appeals by a group of people convicted in the January 13 case and upheld their convictions, but reduced the prison sentence of one of them, Yuri Mel . The court also changed the sentence of Mel who commanded a Soviet tank during the events of January 1991 and reduced his prison term from ten to nine years. The decision of the Supreme Court is final and binding. A total of 13 appeals have been filed in this case. All were sentenced to prison terms.

Lithuania’s National Energy Regulatory Board (GREEN) on Thursday revoked Inter RAO Lietuva, a group owned by Russian energy giant Inter RAO, its export, import and independent supplier licenses. electricity, VERT announced on Thursday 30 June. The decision to revoke the import and independent supplier licenses, suspended at the end of May, was taken after the company did not inform the watchdog before June 26 of its financial capacity to continue operations, and also because it is still on the list, published by the Financial Crime Investigation Service, of Lithuanian companies subject to existing Western sanctions imposed on Russia and its oligarchs.

Germany’s Rheinmetall and Krauss-Maffei Wegmann opened the Lithuanian Defense Services (LDS), a service center for military vehicles, in the central town of Jonava on Wednesday, June 29. The center will provide logistics and maintenance services for combat vehicles belonging to Lithuania and its NATO allies, the Ministry of Defense and the Lithuanian Armed Forces said.

Lithuania recorded 460 new coronavirus infections and one death from Covid-19 on Tuesday June 28, the NVSC, the National Public Health Center, announced on Wednesday June 29. Some 378 of the new cases were primary and 82 were secondary. The number of Covid-19 patients in hospitals currently stands at 66, including two cases in intensive care. The 14-day primary infection rate increased slightly to 122.8 cases per 100,000 people, with the percentage of positive tests over seven days reaching 31%. Over a million people in Lithuania have tested positive for Covid-19 at least once.

Lithuanian inflation in June estimated at 20.5%

Lithuania’s annual inflation in June was 20.5%, according to the initial estimate released by the country’s statistical service, Statistics Lithuania, on Wednesday, June 29. Annual inflation was mainly driven by increases in the prices of food and non-alcoholic beverages, housing, water, electricity, gas and other energy goods and services, household goods and services, transportation. The estimated monthly change in consumer prices was 2.2% in June compared to May.

A cyberattack on Monday June 27 disrupted the operations of some public authorities and businesses in Lithuania. Officials say major incidents have now been contained, but warn attacks could continue. According to the National Cybersecurity Center, the targets of the intense cyberattack included the National Secure Data Transfer Network and other Lithuanian public institutions, as well as private companies. A group calling itself Killnet and associated in the cyberworld with Russia claimed responsibility for the attack. He continues to post information on his Telegram account about planned and executed Distributed Denial of Service (DDoS) attacks.