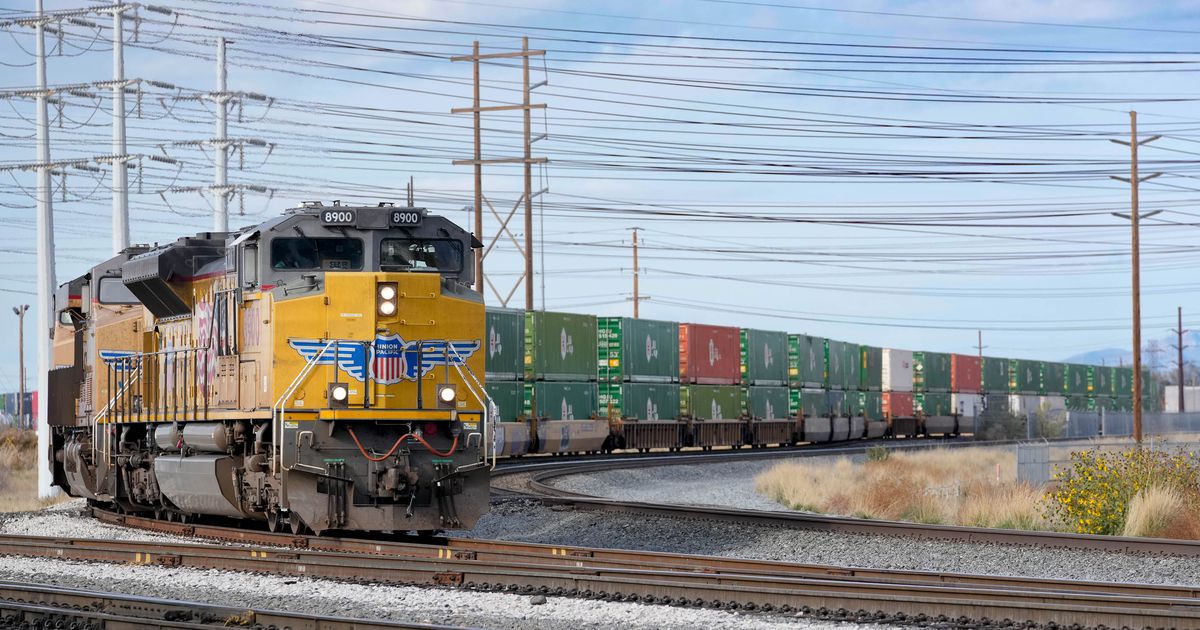 With a newly streamlined board of directors, the Utah Inland Ports Authority looks set to step up its plans to become a significant force in America’s supply chain.

Lawmakers restructured the composition of the council earlier this year, removing representation from affected towns like Magna and West Valley, and replacing them mostly with lawmakers and business leaders.

That new board held its first public meeting on Wednesday, when it discussed boosting rail capacity at the 16,000-acre port, which occupies the still underdeveloped northwest quadrant of Salt Lake City.

Jack Hedge, the authority’s chief executive, told new board members that the port is well placed to help ease the pinch felt in seaports and the ripple effects the pain has across the country.

“The pandemic has exposed some long-standing fragilities in our national supply chain and, frankly, in our economy,” Hedge said. “…We are a solution.”

HB443 reduced the board of directors from 11 voting members to five, with three appointed by the Legislative Assembly and two by Governor Spencer Cox. New board members sworn in on Wednesday include Chairman Miles Hansen, president and CEO of the World Trade Center Utah; Vice Chairman Dan Hemmert of the Governor’s Office of Economic Opportunity; Representative Mike Schultz, R-Hooper; and Senator Jerry Stevenson, R-Layton.

An agenda for the meeting listed Theresa Foxley, president and CEO of the Utah Economic Development Corporation, as the fifth board member, although she was not present.

She is also the only board member who lives in an area that will undoubtedly be impacted and transformed by the Inner Port.

“This project is perhaps the greatest double-edged sword that will ever come to my community in a generation,” Petro-Eschler said at the meeting.

(Chris Samuels | The Salt Lake Tribune) Salt Lake City Council member Victoria Petro-Eschler speaks in December 2021. She is a nonvoting member of the Inner Harbor Board of Directors.

The council member expressed her optimism about the economic opportunities and jobs that could come for her constituents, for example in Rose Park and Jordan Meadows. But she also shared her worries about the long-term consequences, like deteriorating air quality and noise pollution.

Petro-Eschler noted the difficulties facing Elwood, Illinois. Home to the country’s largest inland port, the city faces a barrage of truck traffic from giant retailers, but few stable, well-paying jobs. Its water supply is also about to dry up.

“I’m confident we’re smarter, that we can learn from history and apply lessons, and we can do that in a strategic way that brings economic benefits,” Petro-Eschler said. “But we can’t, for a moment, take our eyes off the ball or this thing will go off the literal and metaphorical rails.”

The Port Authority’s first act of “good faith”, she says, should be to create overpasses at level crossings so that emergency vehicles and commuters are not constantly delayed by trains.

“I can’t tell you how much money I spent on late fees picking up my kids from kindergarten,” she said, “because I got stuck at one of those crossings. stinky level.”

The role of rail and road

Supporting more rail infrastructure is a top priority for the Port Authority, which secured a $150 million bond last year to build projects like a transshipment facility that will move goods from trucks to trains and back. .

“Today, between 200 and 400 trucks a night are parked on the streets of our city in Salt Lake City, mostly on the west side,” he said, adding that in hot or cold conditions, these trucks run at idle at all times to ensure driver comfort. “It puts a lot of pollution in the atmosphere…and also a lot of noise pollution.”

However, new board members didn’t seem entirely happy with how the Port Authority has invested its public funds to date, questioning the nearly $11 million contracted to expand 700 North. Those dollars came from a state infrastructure fund that lawmakers considered allocating to the port in 2019 to improve rail access near Interstate 80.

(The Salt Lake Tribune) Republican Representative Mike Schultz is a member of the board of the Utah Inland Park Authority.

“Rail should be what we primarily focus on,” Schultz said, “not roads, not truck traffic.”

Council members demanded copies of Port Authority contracts, signaling that they would explore “escape clauses” and what the cost would be to cancel the agreements. They also suggested a legislative audit of the port authority.

“This is not a witch hunt,” Stevenson said. “It makes sense for all of us involved, that we look at exactly where we are here. Are there any contracts we have that we may not want to be involved in?”

Some members of the public took the suggestion of an audit as a sign that the new council is open to greater transparency.

(The Salt Lake Tribune) Republican Senator Jerry Stevenson, introduced in 2018, is a member of the board of directors of the Utah Inland Port Authority.

“The public would be very grateful for this information,” Deeda Seed, with Stop the Polluting Port Coalition, told the board. “One of the challenges we’ve faced…is really the lack of information about what’s planned.”

How the meeting went

Wednesday’s meeting marked the first time the Port Authority has not livestreamed its meeting since the start of the coronavirus pandemic, even though the board met in a committee hearing room on Capitol Hill. who has the ability to broadcast. The board did not allow virtual participation. At least three members of the public did not have enough time to comment. The port authority also did not post the meeting agenda on its own website.

Community members raised several other concerns with the new council that have been shared with other councils in the past, including how water consumption from the harbor would affect the shrinking Great Salt Lake. Others urged council to come up with a thoughtful master plan instead of letting developers and private landowners determine the future of the northwest quadrant.

Seed called on council members to better engage with the public and explain the business case for the inland port.

“In Utah, we pride ourselves on our hard work and a Western spirit of self-reliance,” Seed said. “Yet, sadly right now, the Port Authority is the epitome…of social capitalism based on giving taxpayers’ money to special interests.”

Hansen, the chairman, said virtual attendance is “absolutely” something the board could consider in the future. He also reported that the council would meet much more frequently.

“My commitment is that we will act urgently,” he said, to address the global supply chain crisis.