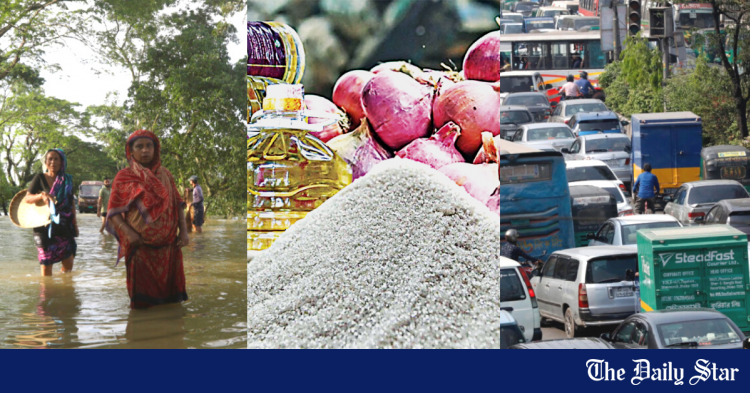 Systems Thinking: A Solution to Our Many Global Crises

Systems thinking, which looks at how different parts of a system fit together rather than breaking them down into separate silos, is gaining popularity in different fields. It is time we applied it to Bangladesh. COLLAGE: STAR

Systems thinking, which looks at how different parts of a system fit together rather than breaking them down into separate silos, is gaining popularity in different fields. It is time we applied it to Bangladesh. COLLAGE: STAR

We live in extraordinary times. Inflation, rising income inequality, mass extinction, war in Ukraine and the climate crisis are arguing (or should) be on the international agenda. Bangladesh also lives under a thick cloud of pollution and the daily drama of road deaths.

And what is our response? For each problem, there is an array of suggested solutions, but most tend to be extremely limited and focused. After all, many people are specialists who have developed expertise in a particular area. Unfortunately, that means they tend to think in silos. Expertise is vital – we probably can’t and shouldn’t all be generalists. But if people are too trapped in their silos, they don’t see how different issues connect.

For all the latest news, follow the Daily Star’s Google News channel.

When we think in silos, we develop individual solutions for each of these problems. Since we are so dependent on fuel, the price of virtually everything goes up when the price of fuel goes up, so we demand greater fuel subsidies.

Air pollution is killing us, so we demand technological or other solutions to magically clean our air while watching the problem continue to grow. We make rules about seat belts and motorcycle use and continue to mourn those who die on our roads.

As for the climate crisis, we talk about the need to move away from fossil fuels while wondering how to adapt to a world increasingly marked by droughts, floods and violent storms.

As I have suggested before in these pages, we had better take a fresh look at these questions. We need to embrace 21st century thinking, rather than continuing to believe that the answers that helped us in the previous century will continue to serve us today.

Rather than subsidizing fuel – and therefore continuing to contribute to the climate crisis – we should think about how localization can help solve our problems. Localization would reduce the need to travel and ship freight around the world; instead, we would mainly depend on local production for needed goods. Rather than demanding cheap fuel, we should be demanding affordable transportation. We could do all of this while increasing road safety – or rather travel safety – by shifting our focus from a motorized way of life to a simpler way of life. We could access it by proximity rather than by constant movement. Each of these approaches would help solve our other problems rather than trying to reduce one problem while making the others worse.

In the United States, the recent rise in gas prices has led to a surge in demand for bicycles. Sustained higher fuel prices would provide the necessary incentive to wean ourselves off fossil fuels, which we need to do anyway. By demanding lower prices, we make ourselves vulnerable to future price increases – and fail to address the other problems caused by our reliance on cheap fuel.

The crises we face are terrifying. And yet, I can still imagine an infinitely better life that would solve many of our problems – reducing our dependence on fuel, cleaning up our air, lowering the prices of essential goods, helping to prevent mass extinctions, reducing income inequality and reduce the crisis climate – while contributing, rather than destroying, our chance at happiness. We don’t even need magical new technologies that haven’t yet been invented or expensive consultants to guide us. Our ancestors, or even indigenous peoples, had the tools to live much more compatible with nature. This knowledge is rapidly disappearing, but we can still access it. We can learn the joys of simplicity.

Consider load shedding. Either we swear and sweat or we rely on diesel generators which are expensive, pollute and undermine the whole purpose of load shedding in the first place. But we could make whole cities much cooler if we used better design: more land, canals, trees and parks in the city, and more rooftop gardens. These changes would also help mitigate flooding. If our cities were cooler, it would be easier to get around – at least for short trips – on foot, by bicycle and by rickshaw. In a town 15 minutes, or better yet, five minutes away, most of what we need would be nearby. Thus, we would need cars and fuel much less, and have more space and money to spend on expanding nature and agriculture in our cities, again reducing the need for transportation. and fuel while creating much more livable cities.

Systems thinking, which looks at how different parts of a system fit together rather than breaking them down into separate silos, is gaining popularity in different fields. It is time we applied it to Bangladesh. After all, in the 21st century, this is the greatest hope we have for a livable future.

Debra Efroymson is the executive director of the Institute of Wellbeing and author of Beyond Apologies, Defining and Achieving an Economics of Wellbeing.