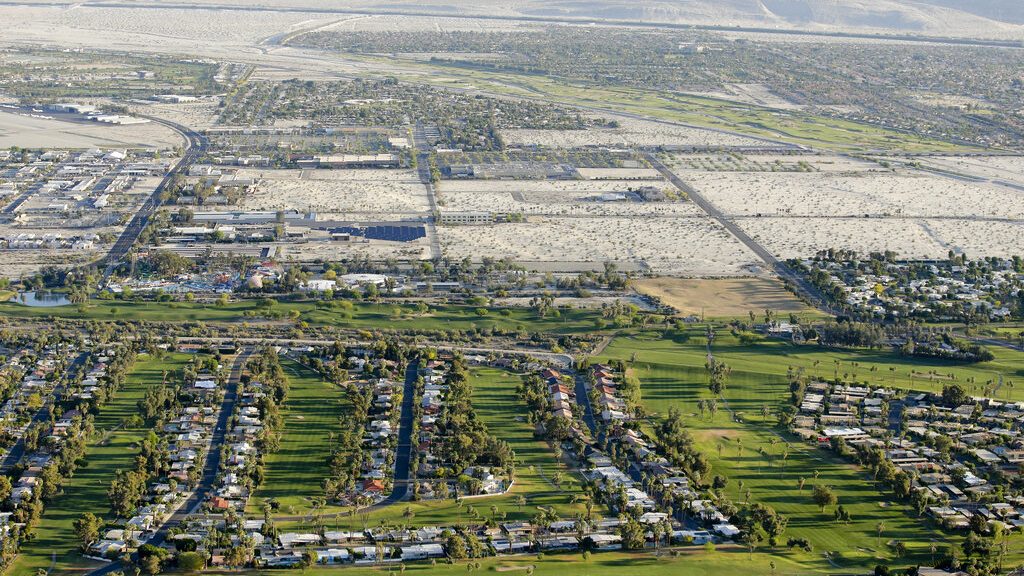 In over-sunny Southern California, residents of the popular Sonoran desert town known as Palm Springs are roasting in the heat and worried about their water. With an eye on future shortages, the people of the desert have crafted what they see as a logical proposal, which they have repeatedly promoted in the letter pages of their local newspaper, the Desert Sun.

Their solution to a looming, albeit uneven, water crisis? Sending water from Minnesota and the Great Lakes or thereabouts.

“The West is dry. We hadn’t planned enough. We need water from the Midwest,” reads a July 15 online Letters to the Editor headline.

“When Floods Hit the Midwest, the West Helps Pay,” read another July 17 letter headline. “Then give us some water.”

“Snowbirds winter in the desert, but are reluctant to share the water? Hypocrisy!” reads a headline from July 19.

“The United States went to the moon. Surely he can move water from the Midwest to the West,” reads yet another July 12 letter.

Desert Sun editor Julie Makinen said she had never seen so much traffic for a single letter, like the one that drew nearly 75,000 page views on June 22 when a Las Vegas resident opened the ball by writing that water from the Mississippi River could be diverted to the Colorado River.

The problem behind this supposed solution? A mega-drought measured last year in western states like California and Nevada and extending into Montana and Texas is considered the worst of its kind in 1,200 years.

“(Environmental journalist) Janet Wilson’s article about federal officials proposing drastic measures to stem California’s water crisis was terrific,” wrote Bill Nichols, in a 99-word letter to the editor. “Instead of just conservation, what about a Tennessee Water Authority-type project to divert the Mississippi River and build a canal with reservoirs along the way, to bring it into the Colorado River? Killing two birds with one stone – not so far-fetched when you see the type of projects being built in the Middle East and China! It is a question of will.

“Talk about a big works project,” Nichols added, “and a fantastic way to usher in a new decade for the South West.”

Then, on June 30, a letter writer’s suggestion that “we could fill Lake Powell in less than a year with an aqueduct from the ()Mississippi River” was picked up by Google’s “Discover” feed, which automatically matches news to users based on their interests.

Suddenly, this single letter from Desert Sun was attracting 465,000 online page views, a record for the paper, which has a daily paid circulation of 20,000 to 50,000 copies.

‘THIS IS JUST CRAZY’

“It just blew up,” Makinen said, noting that it usually takes some effort to find a scintillating rate for letter pages. “It just got crazy. I’ve been here four years and we’ve never had this level of commitment.

The last major controversy on the Letters page, she said, was over a proposal last year to install a giant statue of Marilyn Monroe, pale-legged in a flowing dress, in downtown Palm Springs.

The growing, some might say thirsty, demand for water from the Mississippi River has not been met. Midwestern snowbirds familiar with the paper, among other readers, also wrote, appalled at the prospect of pumping or trucking water from the river some 1,900 miles across the country to some of the most remote corners. hottest, most expensive and most crowded in the country.

“Midwestern water could bring in invasive species,” warns one letter writer, already bracing for the consequences of a hypothetical water corridor.

“I live in Red Wing, Minnesota,” begins a recent letter from reader Paul Cofell. “Recently, I noticed several letters to the editor in your publication that encouraged taking water from the Mississippi River or the Great Lakes and diverting it to California via a pipeline or aqueduct. time letting you know that it won’t happen because the local citizens here don’t want you to have that water.

Cofell added, “There are many, many people living along the Mississippi River and around the Great Lakes who really, really don’t like California or Californians.” He also pointed to a time in California history when farmers in the valley near Los Angeles blasted an aqueduct that stole their agua.

“We have a lot of dynamite in Minnesota,” Cofell wrote. “My advice to you is: don’t californate the upper Midwest.”

This isn’t the first time the issue of water shortages across the United States has inspired proposals to borrow H2O from the Mississippi River.

In 2019, a railroad company in Lakeville drew up plans to pump 500 million gallons of groundwater a year from an aquifer in southeast Minnesota and ship it to the arid southwest. Dakota County elected officials cried foul, and the Minnesota Department of Natural Resources moved quickly to assure residents that the DNR saw “virtually no scenario” where the agency would grant a water appropriation permit for the project.

This proposal came from Empire Building Investments, the real estate arm of Progressive Rail, based in Lakeville.

Alarmed, the Dakota County Board of Commissioners voted in May 2020 and April 2021 to approve tougher water control regulations that prohibit new wells using more than 50 million gallons of water per year for l commercial or institutional water supply. They exempted agricultural uses.

State and county officials noted that Minnesota has its own challenges when it comes to maintaining hydration. The state was hit by widespread historic drought conditions last year, and parts of the state began sliding back into drought territory this summer.

“The reality is that we anticipate our own water quantity issues here in the next 10 to 15 years,” Dakota County Commissioner Joe Atkins said, referring to the county’s water resources study. from 2019. “With the 440,000 residents of Dakota County relying on groundwater or Mississippi water as a source of drinking water, I would fight like hell to protect our water resources and our people.”

Atkins added, “I think the Palm Springs proponents of this half-baked idea have been in the hot sun for too long. I would remind them that they live in a desert and urge them to look for another way to keep their golf courses green.

DNR: ‘MINNESOTA HAS NO WATER GUM’

In response to a reporter’s request, the DNR released an unsigned statement on Wednesday that, in somewhat more technical language, said much the same thing.

Through the DNR, the state is responsible for the protection of the public water supply up and down the river, water transport, agricultural production, habitat for fish, birds migrants and recreation vital to the economy. All of this could be negatively affected by siphoning off millions of gallons of water.

“More generally, it is important to recognize that Minnesota does not inherently have a water glut,” reads the DNR statement. “Last year’s drought that affected most of Minnesota is also a reminder that even ‘the land of 10,000 lakes’ can quickly experience serious water scarcity issues.”

Among the legal considerations, state law prohibits the DNR from issuing a water appropriation permit for more than 1 million gallons per year if the water will be sent more than 50 miles from the source and will be used. for purposes other than public water supply.

“Where the water would be used exclusively for public water supply, the Minnesota DNR is not authorized to issue a water appropriation permit if the water will be sent more than 100 miles from the point of ‘appropriation’, according to the DNR. “This is far from the first time people have offered to transport water from the Midwest to arid western states. Such proposals present a series of practical, legal and social challenges that have proven insurmountable in the past. … It is important to understand the context that makes such proposals both unwise and unlikely to materialize.

‘SURF PARKS’ AND A DISNEY LAGOON?

The US Army Corps of Engineers also issued a written statement last week saying they cannot speculate on hypothetical proposals that they have not formally investigated.

Still, corps officials have privately acknowledged a host of potential problems, not the least of which is the issue of inadvertently transporting endangered or invasive species from one part of the country to another.

For Makinen, the editor of Desert Sun, the war of words over water adds a fun nuance to what is otherwise a serious subject – the tension between widespread drought conditions and growing real estate development in and around Tony Palm Springs.

Some 24 million people live in Southern California, making it the nation’s second-largest combined statistical area behind the New York City metro. And it’s hot. And getting hotter.

In March, the Desert Sun reported that in California, the average amount of water produced per customer was 66 gallons per day in January, but many areas in the Coachella Valley around Palm Springs were pumping nearly three times that amount.

This is despite a call from California Governor Gavin Newsom last summer to cut water use by 15%. Newsom’s calls didn’t go far in the area served by the Desert Water Agency, where water usage has actually increased. Three Coachella Valley water agencies ranked among the top five residential water users in the state last winter, according to state data gleaned by the newspaper.

Instead of extreme conservation measures, more than one Palm Springs-area developer has proposed “surf parks,” where resort visitors and club members can surf in wave pools overlooking the desert. .

“Disney is building a huge new development here that’s going to have a 24-acre lagoon,” Makinen said. “We have 100 golf courses here. Although it is a desert and the state is subject to all these water restrictions, the local water agencies kind of treat this area like an island, where they have reassured people that we don’t we’re not about to run out of water.