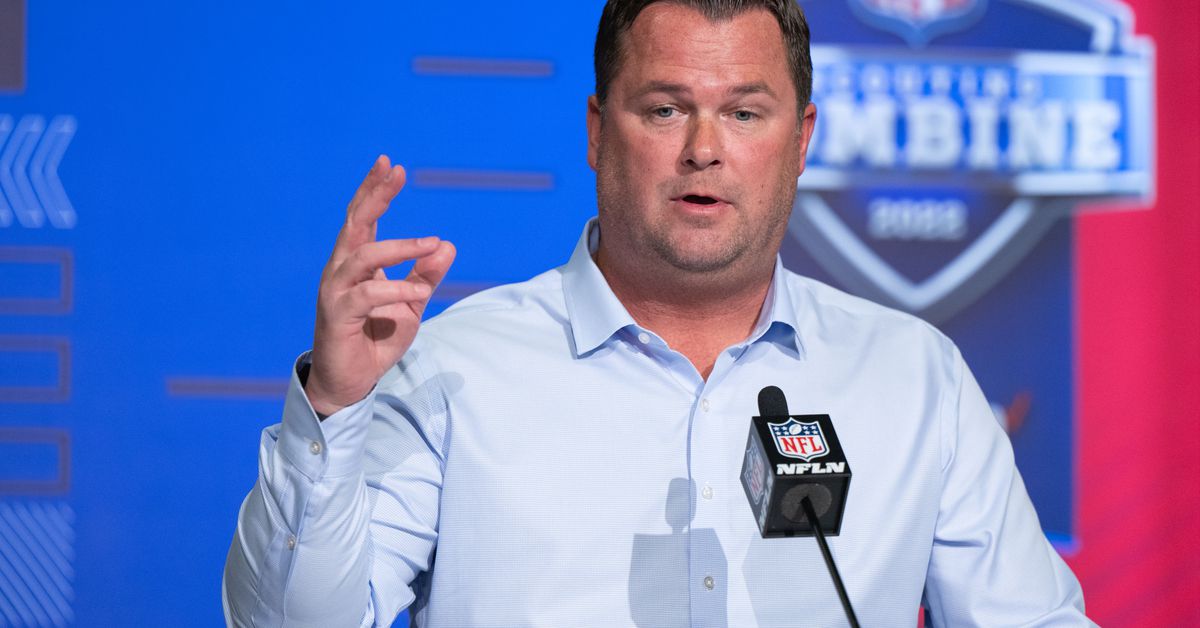 Over the past few weeks, we’ve looked back at Scott Fitterer’s first year as general manager of the Carolina Panthers and assessed his performance in managing the salary cap, free agent signings (offense, defense), the 2021 draft and player trades. Now is the time to give Fitterer his final report card of his rookie season. A “C” grade reflects meeting expectations, so anything above “C” means Fitterer exceeded expectations, while anything below “C” means he failed.

Fitterer lived up to expectations by managing the salary cap by freeing up around $20 million with a few single player releases including Kawann Short ($8.7 million) and Stephen Weatherly ($5.9 million). He took solid steps to restructure the contracts of Christian McCaffrey and Shaq Thompson to free up around $12m, then shrewdly invested that money in extending right tackle Taylor Moton in a $72m deal. dollars over four years.

Those good moves were more than offset by the fateful decision to exercise Sam Darnold’s fifth-year option at nearly $19 million, which looks like a huge mistake. But if the Panthers didn’t have Darnold at $19 million in 2022, they’d probably pay that much anyway to the quarterback who should have replaced him on the roster (unless they take over and start a rookie in 2022). The decision to restructure center Matt Paradis’ contract and inject an additional $5 million in dead money in 2022 hasn’t aged well either. But overall, Fitterer lived up to expectations by managing the salary cap.

But Fitterer’s rating in the free agency space has been held back by the contracts and poor play of tackle Cameron Erving (2 years, $10 million) and guard/center Matt Paradis (3 years, $13.5 million of dollars). Overall, Fitterer exceeded expectations when signing free agents.

Fitterer’s performance in the draft was examined through three lenses – draft day trades (where he was awesome and received an ‘A’ grade), draft strategy in rounds 1-3 (D+) and quality of drafted players (C+). The Panthers rookie general manager absolutely nailed his draft day trades by moving from No. 39 to No. 59 and getting five more picks, including a valuable No. 83 pick.

Where Fitterer failed was in his draft strategy in the critical first three rounds, especially in the first round selecting cornerback Jaycee Horn instead of a quarterback in Justin Fields or Mac Jones, or by consolidating left tackle with rookie Pro Bowler Rashawn Slater. To be clear on Horn, I really like him as a player, but Carolina had much more pressing quarterback and left tackle needs, and they still have those shortcomings today. In the second round, Fitterer went with a luxury pick at wide receiver in Terrace Marshall Jr. on a roster that already included DJ Moore and Robby Anderson. As for the quality of drafted players, it slightly exceeded expectations as Jaycee Horn was excellent in limited action, Brady Christensen looks like a future starter somewhere on the offensive line, tight end Tommy Tremble and running back Chuba Hubbard were good for rookies, while fifth-rounders from defensive tackle Daviyon Nixon and cornerback Keith Taylor made surprisingly positive contributions.

Player swaps are where Fitterer performed like a rookie. Acquiring Sam Darnold for three draft picks — second, fourth and sixth rounders — was a huge mistake that stalls the Panthers’ rebuild. Dumping center linebacker Denzel Perryman, who was on a delightful 2-year, $6 million contract and made the Pro Bowl for the Raiders, trading a 2022 seventh-round pick for a sixth-round pick was an absolute disaster. Although some Cat Scratch Reader devotees may disagree with me on this, I view CJ Henderson’s trade in a negative light. I’d much rather have a very valuable No. 70 overall pick in the 2022 draft and a usable tight end in Dan Arnold on a 2-year, $6 million deal than a struggling young cornerback in CJ Henderson and the pick No. 144 in 2022.

Fitterer redeemed himself a bit by landing Pro Bowl cornerback Stephon Gilmore for a sixth-round pick in 2023, which made perfect sense back when Carolina was sitting on a 3-1 record and coming off losing Jaycee Horn for the season. Fitterer also managed to get spending money for quarterback Teddy Bridgewater (sixth-round pick) and tackle Greg Little (seventh-round pick).

When adding up all of Fitterer’s individual ratings, he scores a 2.1 on a 4.0 scale, earning him a “C” grade. Overall, the rookie Panthers general manager has slightly exceeded expectations in his first year on the job.

Without a few dodgy trades (Darnold, Perryman, Henderson) and missing potential long-term solutions at quarterback or left tackle in the 2021 draft, Fitterer could have had a pretty good first year in office.

As much as I hate to say this as a Panthers fan, this team over the past three years has been disappointing, frustrating and, worst of all, boring. Carolina is 15-34 over the past three seasons, and apathy has set in across large segments of a once passionate fanbase. The team still doesn’t have a clear and inspiring plan in place to become a relevant playoff contender.

The monumental task of creating the blueprint and executing the details to return to relevance falls to General Manager Scott Fitterer. Hopefully he’s learned some valuable lessons in his first year on the job and can now ramp up the Panthers’ rebuild in 2022.

How do you rate Scott Fitterer?