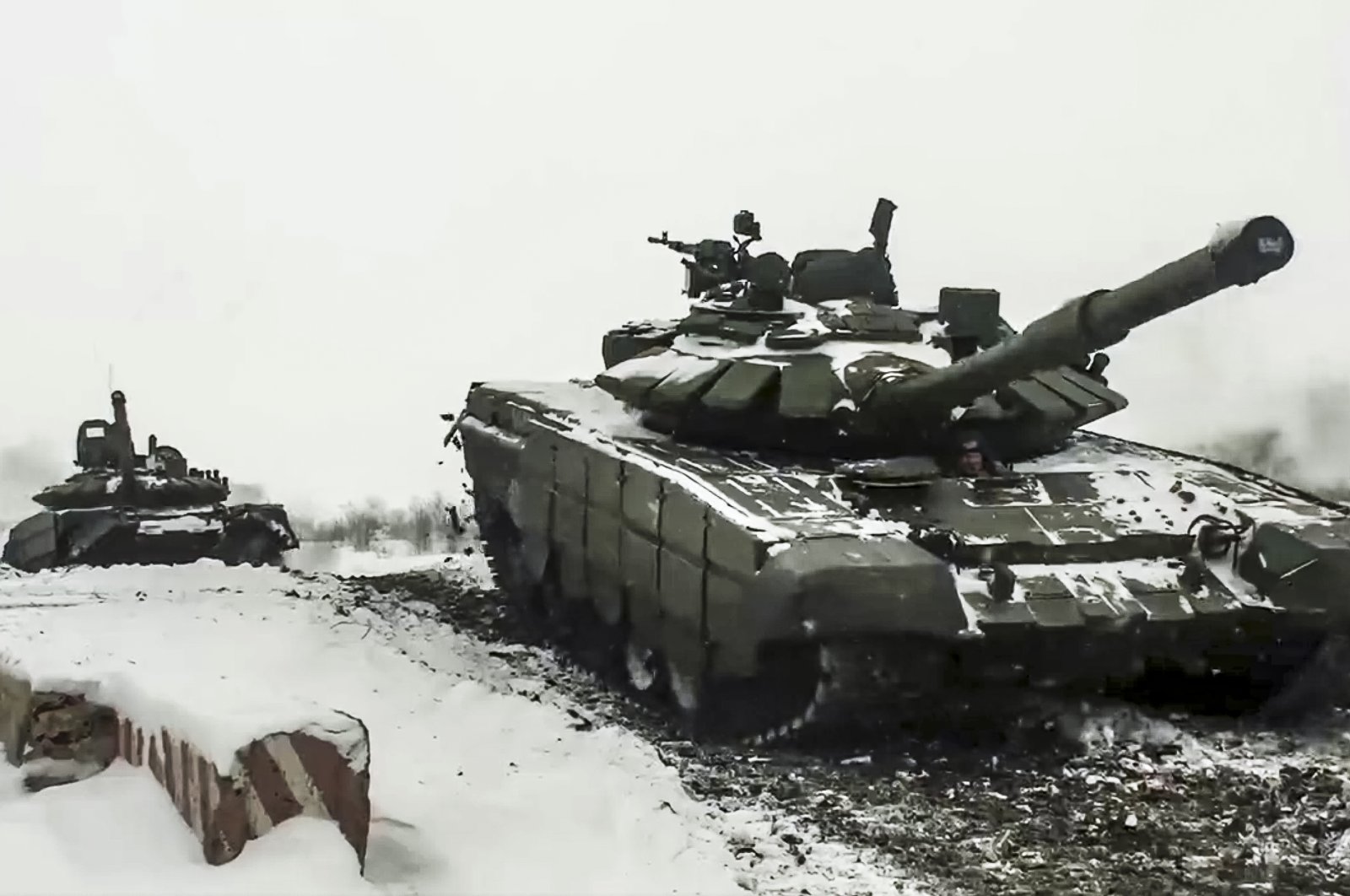 Russia must disarm and show diplomatic will to find a solution

The stakes are high in the increasingly tense atmosphere in Eastern Europe. Having amassed thousands of troops and tanks on the Ukrainian border, concerns about a military conflict are high. Western inaction may signal to Russian President Vladimir Putin that such acts go unpunished. Although the West has so far failed to eliminate tensions between Moscow and Kyiv and to resolve a crisis that has lasted for eight years now, it is clear that there has been a considerable change in mentalities compared to 2014, when the pro-Kremlin leader was ousted by a popular uprising and Moscow responded by annexing Crimea and then backing a separatist insurgency in eastern Ukraine.

While the events of 2014 did not elicit a significant reaction from the West, the rhetoric is now much harsher against Russia, with nearly all countries expressing support for Ukraine’s territorial integrity and sovereignty. and threatening Moscow with sanctions. Although divided on some aspects, Washington and its allies raise the prospect of unprecedented sanctions in the event of an invasion, including a possible ban on dollar transactions, draconian restrictions on imports of key technologies like microchips and the closure of a newly constructed Russian gas pipeline. to Germany, which again encouraged Russia to push the limits.

The West now finds itself in the biggest standoff with Russia since the Cold War. Russia, which denies any plan of attack against Ukraine, already controls the territory of Crimea seized in 2014 and continues to support the separatist forces controlling the Donbass region in the east. It should be emphasized that this uprising was not orchestrated locally but rather a direct invasion from outside with direct foreign funding. Tensions in the region continue as several rounds of diplomacy have failed to allay concerns. The Kremlin says its goal is to get NATO to agree never to admit Ukraine and to withdraw from Eastern European countries already members of the alliance. The United States and its European allies reject these demands. Adding to tensions, large-scale Russian military drills were underway last week with ally Belarus, which sits just north of Kiev and also borders the European Union.

Moreover, the escalating rhetoric of invasion by the West has hurt Ukraine’s economy and its citizens, as has these countries leaving their embassies and halting flights to the country. Belligerent propaganda from Western countries continues almost daily, with one of the most recent examples being Washington’s warning that a Russian invasion of Ukraine could begin during the Beijing Olympics, which end on February 20. Kiev has tried to calm tensions, disagreeing with US intelligence assessments that all-out war could break out at any moment. Turkey, on the other hand, has called for calm and recently stressed that while there is no real risk of invasion, the West must be more sensitive with its war rhetoric.

Meanwhile, as military tensions rise, a process of dialogue and finding common ground is still ongoing. The Kremlin has again accused Ukraine of not joining the 2015 Minsk agreements between Kiev and Moscow over the separatist conflict in the east of the country, demanding autonomy for rebel-held territories and a promise to keep the Organization for Security and Cooperation. the operation in Europe (OSCE) monitored local elections – a poll that would almost certainly keep pro-Moscow rebels in power there. Russia insists that Ukraine negotiate directly with the separatists, which is Ukraine’s red line. One of the biggest threats that could spoil the diplomatic process is Moscow trying to bring Kyiv to the table with the representatives of the occupied territories, although the process is a trilateral one made up of Ukraine, Russia and the OSCE.

Here again, the Normandy Format does not provide for the official participation of these territories either. Moscow further demands that these territories have separate elections and foreign policy from Ukraine; meanwhile, its military presence continues there and no calm has been established, with reports of casualties and deaths almost daily. The occupied territories, which are under the strong influence of Moscow, could be used by the latter to advance its own agenda through their representation. Although the Kremlin calls for self-determination of the region, the same enthusiasm did not show when the Chechens aimed for independence.

The Minsk Agreement is seen by Ukrainians as a betrayal of the country’s national interests and its implementation has stalled. Another advantage for the Kremlin, the document contained no obligation on the part of Russia, which insisted that it was not a party to the conflict. While the Minsk Agreement helped end large-scale battles, frequent skirmishes continued. Russia has failed to withdraw its troops from conflict zones, firmly denying its presence or influence. Russia offered political and economic support to the rebels and granted citizenship to more than 700,000 people in the region. According to Ukrainian diplomatic sources, Kiev is ready for a joint disengagement of military forces and is ready to withdraw its forces once Moscow agrees to do the same. The agreement, signed “under a Russian gun barrel”, included an OSCE-monitored ceasefire, a withdrawal of heavy weapons and foreign fighters from the line of contact and an exchange of prisoners.

With Russia having amassed more than 100,000 troops on its border with Ukraine, Putin is unlikely to back down and return empty-handed, as the whole world is watching the unfolding conflict closely. It would be a blow for the Russian leader, who is already facing perceptible troubles at home. Growing discontent, a crackdown on critics, economic problems, the COVID-19 pandemic and now growing concern over a potential war unnecessary in the eyes of the Russian public, have put pressure on Putin, who has taken advantage of tensions with Ukraine. as a means of distracting public attention from internal misfortunes. According to an October poll by the Moscow-based Levada Center, 47% of Russians would like to see Putin as president after 2024, while 42% would not – one of the highest figures against the president so far. now, making Putin’s concerns clear. As can be observed in many authoritarian countries, the creation of external threats and the use of the notion of nationalism have been a frequent device for winning popular support at home. The same pattern could be identified during the events of 2014. When re-elected in 2012, Putin faced serious economic problems. After Russia’s illegal annexation of Crimea in 2014, Putin’s approval ratings catapulted; however, the light of nationalism has since faded, and disillusion has caused the public to consider alternatives. Moreover, a functional and democratic Ukraine with close ties to the EU on its doorstep is a discrediting threat to Putin’s regime.

Although internal concerns are a major motive for Russia, the tensions also have roots in cultural-historical perceptions. Putin’s view that Ukrainians and Russians are the same nation represents an attempt to provide historical justification to the Russian public for a possible invasion. Traces of this thought could be openly seen in Putin’s article “On the historical unity of Russians and Ukrainians” written in July. Unaware of the long history of its state, institutions, language and culture, Russia still considers the country to be part of its sphere of influence; from a Cold War perspective, if Russia does not control the strategically important Ukraine, others will seek to do so. However, the Russian people themselves, who have strong family and cultural ties with the Ukrainian people, might not want to see the country’s cities burn in an invasion.

Although the annexation of Crimea did not cause a major conflict, the current situation signals a longer process. Both the West and Ukraine frequently stress that a diplomatic solution is the only way to defuse tensions while warning that military escalation will receive a strong response. Russia’s military buildup next to Ukraine and its continued influence and support for separatists in the Donbass are some of the main obstacles in finding a way forward. Considering the Kremlin’s demands of the West to be futile, Putin might finally compromise to save face in this self-made crisis and meet the need to foster popularity at home.

Keep up to date with what is happening in Turkey, in its region and in the world.

Essential Camera Lenses Every Photographer Should Own