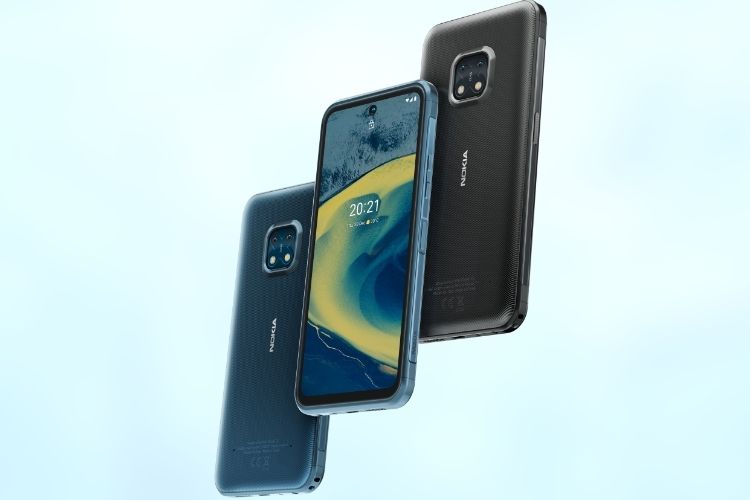 In addition to launching its first tablet in seven years, HMD Global has extended its range of Nokia smartphones in India. So after launching the Nokia G20 in July earlier this year, the company launched its very first rugged smartphone under its X series, dubbed Nokia XR20, in India today. The device can withstand severe environmental and physical abuse and comes with military grade construction to get it through.

Starting with the design, the Nokia XR20 looks like any other smartphone on the market. However, the device can withstand up to a temperature of 55 degrees Celsius and down to -20 degrees Celsius.

In addition, the device is designed to withstand drops of up to 1.8m and can stay underwater for up to an hour without sustaining internal damage. It carries an IP68 rating for dust and water resistance. So, as one can imagine, the XR20 is a rugged and rugged device that aims to meet those who like to go on an adventure trip without worrying about their smartphones.

As for the display, the Nokia XR20 comes with a 6.67-inch Full-HD + display with a 20: 9 aspect ratio. It has a maximum resolution of 1080 x 2400p and a maximum brightness level of 550 nits. The display is coated with Corning’s Gorilla Glass Victus and is compatible with wet hands and gloves. There is also a perforation cutout at the top center to house the 8MP selfie snapper.

Speaking of cameras, the device rocks a dual camera setup on the back. This includes a 48 MP main sensor with an f / 1.79 aperture and a 13 MP ultra-wide lens with a 123-degree field of view. Besides the cameras, the XR20 also has two flashes housed inside the square-shaped camera module on the patterned rear panel.

Internal and other features

Under the hood, the device contains the Qualcomm Snapdragon 480 chipset, the first Snapdragon 400 series chipset with 5G capabilities. So it is obvious that the Nokia XR20 supports 5G connectivity. The chipset is associated with 6 GB of RAM and 128 GB of storage. The device also supports storage expansion up to 512 GB via microSD cards.

As for the battery, the Nokia XR20 packs a 4,630mAh battery that supports 15W Qi wireless charging and 18W wired fast charging. According to Nokia, the device can operate up to two. whole days on a single charge, thanks to AI-powered battery-saving technology.

Apart from these, the device has a side fingerprint reader for biometric authentication, a USB-C port for charging and data transfer and a 3.5 audio jack. mm. It also comes with Bluetooth 5.1 and 802.11ax Wi-Fi support.

The Nokia XR20 will also receive four years of monthly security updates and three major Android operating system updates in the coming years. It comes in two color variants, namely Ultra Blue and Granite, and runs Android 11 out of the box.

Now, as for the price, the Nokia XR20 is priced at Rs 46,999 for the single 6GB + 128GB variant in India. It will be available for purchase in offline retail stores across India, on e-commerce platforms like Flipkart and Amazon, and on the official Nokia website.

The Nokia XR20 will be available for pre-booking from October 20 to 29. The company will begin shipping the device on October 30. In addition, customers who pre-reserve the device will be entitled to free gifts like the Nokia Power Earbuds Lite. and a one-year screen protection plan.