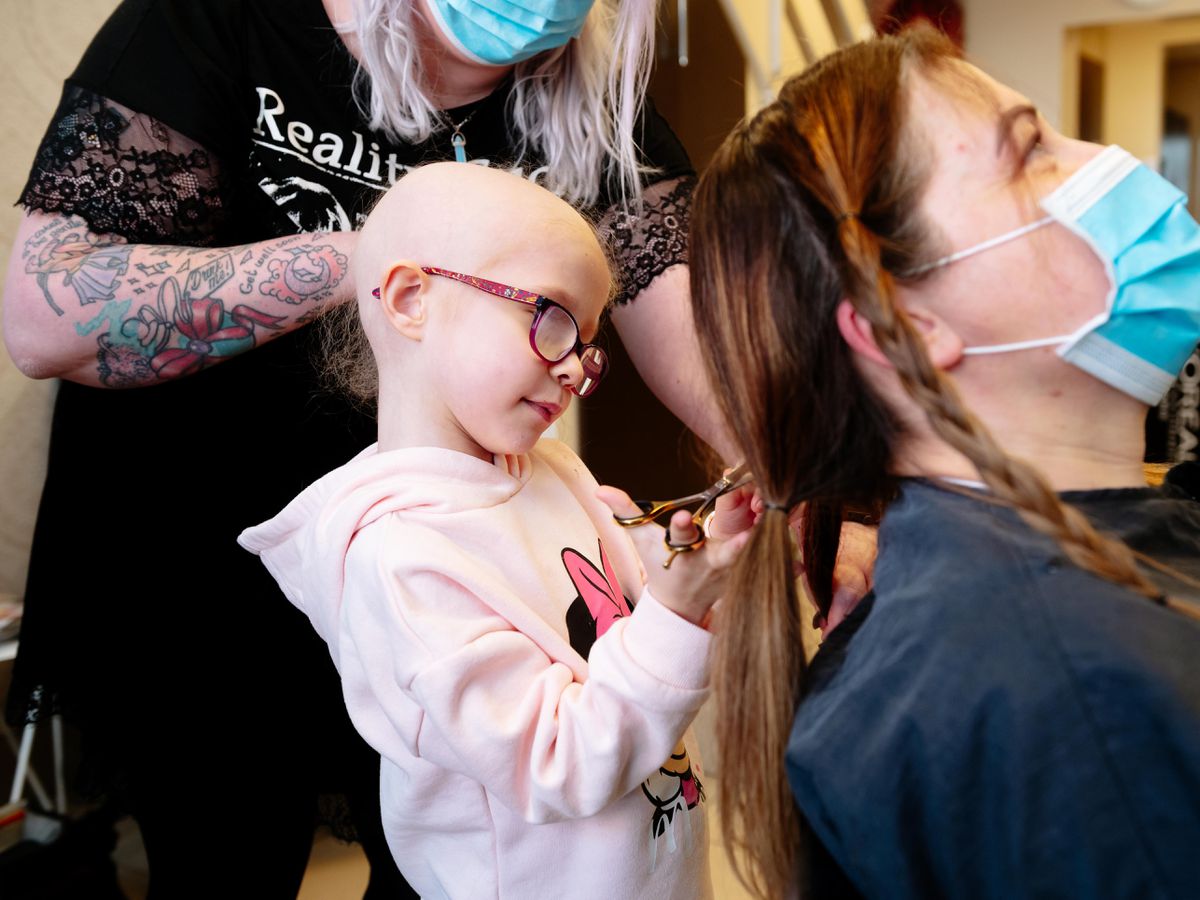 Dulcie, of Lawley in Telford, is currently undergoing treatment for an aggressive cancer – stage 4 neuroblastoma.

Her treatment means she is receiving induction chemotherapy, which resulted in the Lawley Elementary School student’s hair loss.

Dulcie’s mother, Debra O’Kelly, said the idea to shave her head came after her daughter told her she was worried about her appearance.

She said: “Dulcie said ‘mom, am I ugly without hair?’, and I said ‘no, having hair doesn’t define you, it’s just hair and it will grow back. You’re the most beautiful princess that mommy knows. If it makes you feel better, let’s shave mommy’s hair, it’s just hair.”

Heading to Market Drayton’s Francesco Salon on Saturday, Dulcie received the first chop and the first buzz at her mother’s locks.

“She thought it was awesome and she enjoyed it so much she did three or four more before Kelby finished the job.”

Debbie has always had long hair, so it’s a new look for the 39-year-old, who said she just wanted her daughter to feel better.

She said: “I’ve always had long hair. The shortest I’ve ever had was shoulder length – I’ve never even had it in a bob let alone shaved.”

Debbie joked that she looked like GI Jane and added, “I thought I looked like my younger brother just with better eyebrows.”

The family are trying to raise £200,000 in case Dulcie needs follow-up treatment in the US.

And while Debbie urged anyone who wants to donate to donate to the Go Fund Me page, she said the head shave was meant to help her daughter feel better.

She said, “It’s to reassure Dulcie. Raising money for the cause is a bonus, but even without it, I would have done it for her anyway.”

The fundraising campaign has skyrocketed in recent weeks and currently sits at just under £29,000.

The local community, family and friends of Dulcie have all stepped up to support the cause with a host of events planned to help raise funds over the coming months.

Debbie said the family had been blown away by the level of support – with strangers reaching out to offer help.

She said: “It’s been overwhelming. It’s been such an eye-opener. People think that everyone just keeps to themselves these days, that people don’t do anything for other people anymore, but we’ve only been here in this community since 2018 and the response is just amazing.

“I asked a stranger, a friend of a work colleague, to make a huge basket because she has a daughter the same age as Dulcie.

“You never think that’s going to happen to you. If I could go hug everybody and say thank you, I would – and thank you doesn’t even cover how I feel about it.”

As photographers struggle with more expensive lenses, what can camera manufacturers do to attract them?