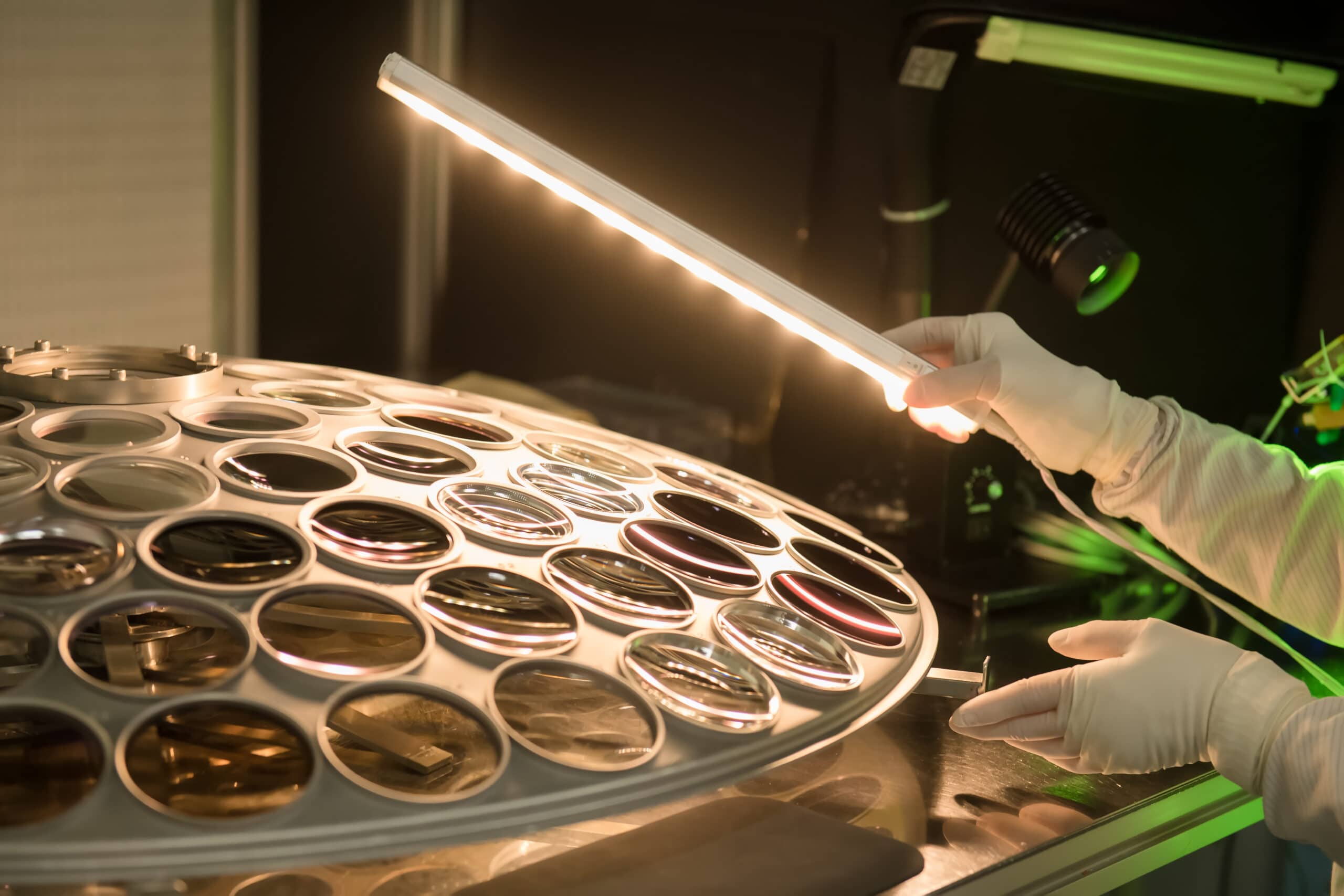 “Made in Japan” glasses, a unique high-end offer

Tokai Optical is a proud Japanese ophthalmic lens company with a long history, but they are a relative newcomer to the Australian optical market. That’s not stopping the company from making a name for itself on the local indie scene with its high-end lens portfolio.

Several years ago a customer walked into the Henderson Optical store in Melbourne and started discussing a high index 1.76 ophthalmic lens. Although for several years it was touted as the thinnest plastic optical material in the world, locally little was known about the product and even its manufacturer.

Firm CBD, based at The Strand Melbourne, has started to inquire to see how it could add the lens to its premium offering for a predominantly affluent population.

“After some research online, I found out that the 1.76 lens was a product from a Japanese company called Tokai Optical,” recalls store manager Annie.

“After some further research, we found a distributor in Queensland and began doing business with them. As an independent company that dates back to the 1950s, we have an ongoing relationship with many lens labs and only use than everyone’s high-end products.The Tokai 1.76 is a unique product and has become our benchmark for super thin lenses, and the relationship has since expanded into other areas including lens coatings and tints. high quality.

The Henderson Optical story fits many other business accounts Tokai Optical has opened in Australia in recent years as it seeks to establish itself in the domestic lens market. It’s particularly geared towards the high-end category, with lens technology designed from the ground up by an in-house R&D team – the company’s most expensive department.

For most of the past decade, the Tokai brand has been represented in Australia through a distributor. But the company changed course in 2019 and established an official subsidiary (Tokai Optical Australia) now operated by Queensland-based Mr Justin Chiang, a trained optical distributor with over 20 years of experience in the industry working for independent companies and groups.

Founded in 1939, privately owned Tokai Optics is one of the oldest in the lens market. However, until the early 2000s, it was solely focused on the Japanese domestic market where it now has a 16% market share, making it the largest manufacturer by size and the third largest in Japan. Overall, this makes it a relative laggard in the market, but it quickly expanded its presence to now operate in over 50 countries.

Chiang acknowledges that Australia’s small and mature optical market – with growing vertically integrated businesses – makes it harder for a company like Tokai to break through. But it has defied expectations so far, even with COVID, and secured major supplier deals with practices in New South Wales and Victoria.

“We’re definitely growing, and that’s because we’re building customer loyalty,” he says. “Some customers start with a unique product that they can’t get elsewhere. Over time they have found the feedback to be very good and they will tend to use our glasses more.

Explaining Tokai’s positioning in the premium category, Chiang says examples include the scrapping of conventional coatings in 2009, meaning every level in its portfolio is produced with the free-form method as standard.

More than 20 years ago, it also made UV protection standard in all its lenses, even up to an index of 1.5, which it said was many years ahead of its rivals. .

As a result, Chiang says Tokai came to Australia looking to target independent boutiques. While this has happened, the company has also opened accounts with several freelancers in low-to-middle income demographics, some of whom use the company’s standard lenses as a premium offering.

“We believe that everyone should have the opportunity to use Tokai lenses, so if a chain or a group approaches us, we will be open to doing business with them,” he explains.

Th-Eyecare, an independent that moved into a shopping center in the Sydney suburb of Strathfield in 2016, is another store offering Tokai lenses. The firm’s clientele is mainly made up of high-income patients from various backgrounds.

Senior Optometrist Ms. Thao Hoang says she was drawn to Tokai after a conversation with an optometrist friend. On a trip to Japan shortly after opening her practice, she visited the Tokai factory and was impressed with the technology and staff in her laboratory.

“I came back to Australia and have supported them ever since; I’ve been using their lenses for five years and they have never let me down, even with the hard work, I have great confidence in their lab,” she says, explaining that Tokai accounts for 90% of her lens sales.

“I know how the lenses are made, because I’ve seen the factory and the machinery, but most importantly, when customers start using them, they’re very happy, which is important for customer retention.”

Chiang says Tokai’s factory and R&D team established the platform for the company.

Despite a market trend to produce lentils abroad for profitability reasons, he says the company remains one of the few that still manufactures the bulk of its products in its own region. The only exceptions are a factory in Shanghai – established to avoid China’s strict import regulations – and a Belgian factory producing commodities to support a partnership with a national optical chain.

“Made in Japan has always been synonymous with high quality, even if it costs us more, we want to protect and maintain the control we have over our production processes, which includes the environmental and working conditions of our employees”, he declares.

For this reason, Chiang says Tokai has been able to implement an effective sustainability strategy. He was an early adopter in this field, first obtaining ISO 9001 (Quality Management Systems) and 14001 (Environmental Management Systems) certifications in 2000. In 2005, he was also became a zero-emission facility; the allowable amount of household discharge per person per day is 50g, but the company has reached 9.7g per day per employee, including industrial and personal waste. This is possible through initiatives that, among other things, see the by-products of lentil production converted into charcoal as an industrial energy resource, and the cafeteria’s cooking oil converted into biodiesel to run its generator.

More importantly, however, Chiang said Tokai’s “in-house” philosophy extended to lens development and production. It avoids outsourcing any of its processes or products, with the exception of the raw material for the lenses, which is supplied by a handful of chemical companies around the world.

The company says this is possible thanks to its major focus on R&D, its most resource-intensive department. It employs chemical engineers who develop patented formulations which they then pass on to producers of raw glasses. This helped it to compete at the highest level with its lens coatings and produce the famous 1.76 index lens, which is said to be up to 47% thinner than conventional lenses made from the monomer CR- 39.

“Some companies may not develop their own coating formulas, but go to chemical companies and ask for certain things like blue light blocking or scratch resistance level, which is then produced for them,” Chiang explains.

“Tokai writes every coating formula in-house, and it’s thanks to our optical film division that produces coatings for industries such as fiber cables, surveillance camera lenses, and a light concentrator to receive radiation. Cherenkov; these require much higher quality coatings and to satisfy some industries you need to understand light and how chemicals interact with it.

“That’s why we were able to produce unique products like the thinnest lens in the world because we work alongside the chemical company with our own technology. Even now some may not be able to tint their high index lenses to certain colors or percentages because they have to work with what the chemical company has but we can actually tint sunglasses color the darkest in all the materials we have.

According to Tokai, other examples of its chemical engineering capability include medical filters, the most durable anti-reflective coatings on the market, a new antibacterial coating and anti-fog properties built into the chemical structure of the lens. He was the first in the world to introduce hydrophobic multicoating and produced a lens called Lutina, which Chiang describes as the next generation in UV protection.

“Most of the market is focused on UV blocking, but subsequent studies have also shown that high energy violet, in the visible light range of 400-420nm but close to the harmful UV level, can degrade lutein in your eye, which is essential for maintaining eye health and requires yellow-pigmented vegetables. Lutina absorbs high-energy violet through its material and is available on all lens materials,” he says.

Tokai Australia is based in Brisbane, but pursues a national footprint, with some of its largest accounts located in New South Wales and Victoria.

Compared to more well-known brands, Chiang says it is priced competitively and also offers basic lens options that still have relatively high levels of technology, such as free-form production and high-end anti-reflective coatings.

Before COVID, the turnaround time was five to eight days While his lab continues to produce and ship lenses in three days, on average, shipping via DHL amid the pandemic has pushed that timeframe to execution at seven to 10 days.

“Some optometrists do their own grinding, but some don’t have that capability and prefer us to do it, so we also offer a fitting service in Australia,” he adds.