Human papillomavirus (HPV) is the most common sexually transmitted infection (STI) in the United States. It most commonly affects the genital areas, as well as the mouth and throat. Research has shown that HPV is a cause of cervical cancer and Chlamydia trachomatis is a potential cofactor in the development of cervical intraepithelial neoplasia (CIN). However, few cases have been reported on understanding this co-infection and its mechanism through the prism of molecular biology. We present the case of a 22-year-old woman with complaints of persistent lesions on the lips for more than 6 months which have increased in number. Histopathology was suggestive of HPV. This case report highlights the importance of HPV and chlamydia co-infection as major causes of persistence of condyloma acuminata and low-grade squamous intraepithelial lesion (LSIL), as well as the importance of screening and the clinical management of vaginal HPV.

Cervical pathology that presents with abnormal cervical cells, whether precancerous or cancerous, is commonly associated with human papillomavirus (HPV). Most commonly, high-risk HPVs, such as HPV 16 and HPV 18, play a role in cervical epithelial cell transformation by inhibiting tumor suppressors such as TP53 and pRb. [1]. Although HPV plays a huge role in cervical dysplasia and carcinoma, there are other factors and events leading to the development of dysplasia and cancer. One of these factors is the co-infection of Chlamydia trachomatis (C.trachomatis) which has the potential to disrupt the cervical epithelium and therefore increase the persistence of HPV and increase the risk of dysplasia and neoplasia [2]. Its role in oncogenesis has been linked to its effect on inhibition of the mismatch repair (MMR) pathway and DNA disruption which together can lead to uncontrolled proliferation [3]. This case study focuses on HPV and chlamydia co-infection as a determining factor in the persistence of both condyloma acuminata and low-grade squamous intraepithelial lesion (LSIL) at the molecular level.

Presentation of the case

A 22-year-old woman with a medical history of polycystic ovary syndrome (PCOS) presented to the family practice clinic to establish care with a primary care provider. The patient complained of lesions around her lips that had persisted for at least 6 months. She has never had a cervical exam before and has never been tested for a sexually transmitted disease in the past. On pelvic examination, several (>20) 1-2 mm warty lesions were located on the labia majora (Figure 1). At this time, the lesions were a brownish color similar to the patient’s skin, soft, cauliflower-like, and without any complaints such as pain, redness, or itching. The remainder of the physical examination was unremarkable. Papanicolaou (Pap) smear and sexually transmitted disease (STI) screening samples were collected.

The patient tested positive for C.trachomatis infection and cervical cytology resulted in LSIL. She was quickly treated for C.trachomatis with doxycycline. The patient returned to the clinic for a biopsy of the vulvar lesions. Due to the diagnosis of LSIL, an HPV sample was also taken at this time. The biopsy revealed that the culprit of the lesions was condyloma acuminata. E6/E7 viral messenger RNA from 14 high-risk HPV types (16,18,31,33,35,39,45,51,52,56,58,59,66,68) was not detected.

The patient was advised to return for another Pap test in 6 months due to LSIL with no finding of high-risk HPV and to return earlier to discuss treatment with trichloroacetic acid (TCA) for venereal warts . When the patient returned, the lesions around the lips were diffused bilaterally without improvement in number or appearance; however, the patient complained of great discomfort due to itching. She consented to continue ACT treatment (Figure 2). The patient tolerated the first TCA treatment well. After treatment, several warts still persisted, but five larger warts decreased in size. The patient has agreed to continue ACT treatment weekly and will follow up in 6 months for a Pap test. 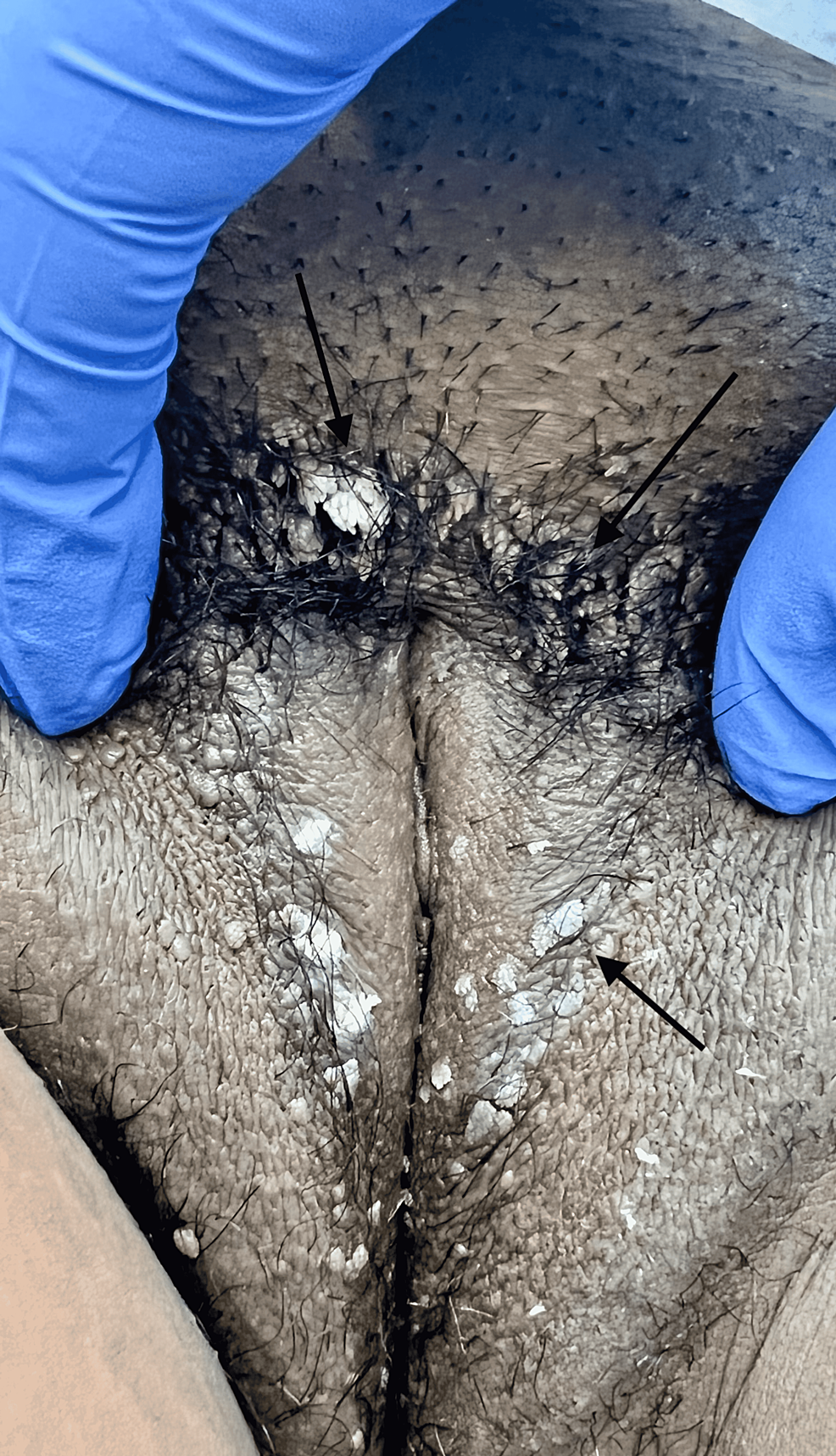 C.trachomatis is a common sexually transmitted disease. Although it can be easily treated, it can often be asymptomatic and lead to damage to the female reproductive system through the formation of scar tissue. [4]. Not only can it cause such permanent damage, but it also has the potential to transform the cervical epithelium.

C.trachomatis affects the MMR pathway by inhibiting the expression of MMR genes [3]. The role of this pathway is to correct any errors after replication such as insertions or substitutions. When there are errors in this pathway, genomic stability cannot be maintained. This leads to microsatellite instability (MSI) which has been linked to many cancers, including cervical cancer [5]. C.trachomatisMMR inhibition occurs via proteasomal degradation of E2F1, a transcription factor. Such inhibition of this pathway is thought to promote mutation and thus oncogenesis [3].

The role of HPV in cervical pathology is widely known and has played a role in current cervical screening practices. Recommendations established by the American College of Obstetricians and Gynecologists (ACOG) are to begin screening with cytology alone at age 21 to 29. From 30 to 65 years old, one can either undergo a cytology alone every 3 years, an HPV test alone every 5 years, or HPV co-test and cytology every 5 years [6]. Although many HPV infections can resolve on their own, co-infection with C.trachomatis shown to be a risk factor for HPV persistence [2,7].

However, C.trachomatis and other possible co-infections currently play no role in cervical cancer screening guidelines.

Our patient presented with diffuse and persistent vulvar warts quickly identified as condyloma acuminata. During further evaluation, our patient was diagnosed with C.trachomatis. Although the patient tested negative for high-risk HPV types, cervical cytology revealed LSIL.

This case illustrates the role that C.trachomatis plays in cellular reprogramming. At a young age, HPV infection is expected to resolve on its own and pose a low risk of disease. Yet this case demonstrated that when chlamydia co-infection is involved, the patient’s HPV-related disease, even without detection of high-risk HPV, leads to persistent and numerous warts and a diagnosis of LSIL. Although the role of chlamydia in cellular reprogramming continues to be studied, this case supports current studies that such co-infection plays a role in the disease. This should prompt clinicians to frequently screen for chlamydia in order to treat it before it can play a role in cell reprogramming and increase the risk of cervical and vulvar disease. Although it is prudent to observe and screen patients with a current or past history of C.trachomatis for cervical cancer with more attention, further studies should continue to be conducted before defining new preventive guidelines.