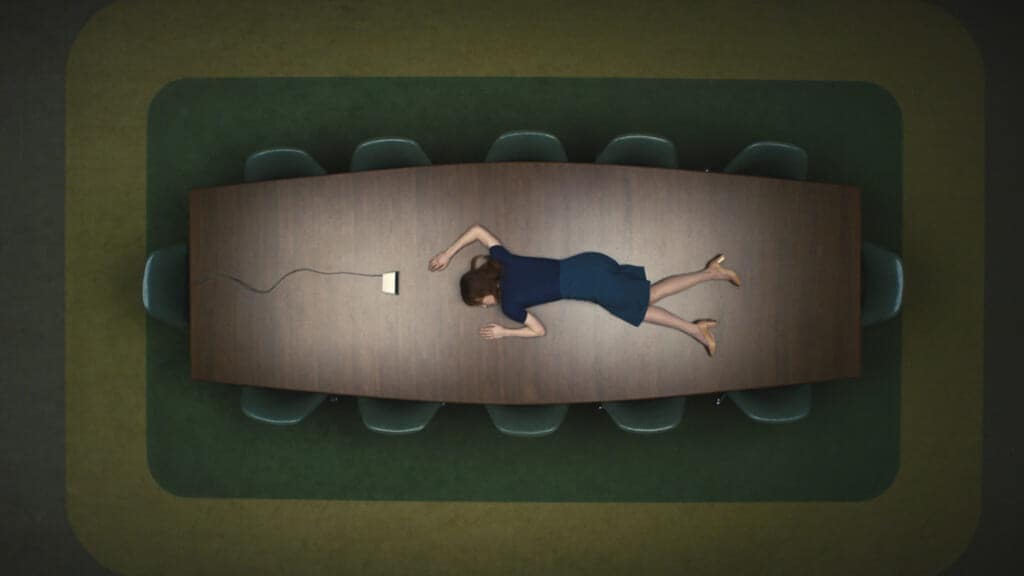 Inside ‘Severance’ looks and lenses

This story about “Severance” first appeared in the Comedy & Drama issue of awards magazine TheWrap.

When cinematographer Jessica Lee Gagné got the call from director Ben Stiller asking her to star in a deeply conceptual sci-fi series called “Severance” for AppleTV+, she said yes immediately. They had had a great experience working on the Showtime limited series “Getaway to Dannemora”. But unlike the gritty ’70s feel of that headline-grabbing prison escape drama, “Severance” was a deliberately rigid puzzler, often set in claustrophobic offices. With only four walls in sight, its characters — led by grief-stricken, brain-altered Lumon Industries representative Mark (Adam Scott) — go about their day unaware of a greater conspiracy at play. (Or are they?)

“I thought to myself, ‘How am I going to create something fun for myself here as a cinematographer?’ said Gagne. “I felt like I was going to be trapped in this world, day in and day out. It’s the opposite of how I like to work as someone who wants to approach every scene with a different texture. But that’s why Ben and I work well together, because we both have that goal and we say, “Let’s do something different here,” often at odds with the challenge presented to him.

Read also :
Why ‘Severance’ Emphasized ‘Kindness and Heart’ Instead of Cynicism | wrap video

“I struggled as a cinematographer because I always rely on reality in my work. Everything we did was very grounded in reality, no matter how we shot, so if you go back and watch the (more confusing initially) sequences, it’s actually quite simple and logical, you just have to relate it to what happens to the individual character.

“Severance” captured critics and viewers last spring with its dark, funny, and uncompromising look at a company’s literal use of mind control. The series comes straight from the imagination of Dan Ericksonbut it took Gagné’s sensibility to create a visual language that portrayed the characters’ “Innie” (their surgically-enhanced working state) and “Outie” (their state out of the office, unaware of the other character).

“Dan’s weird, weird world of Lumon was so unique and had so much room to do something with a lot of visual potential,” Gagné said. “We really had to push ourselves and not take things exactly as they are written.” The team used various lenses and lighting designs to bring these worlds to life, resulting in a lush setting that was as inviting as it was eerie.

“Panavision is a huge partner with Ben and has always been really collaborative with us, and they’ve given us access to some really cool stuff,” Gagné said. The team used a large-format 50mm C-series lens, dubbed “the Silver Bullet”, for close-up, portrait-like shots. And then there was the Primo 70, used for stunning scenes such as the “Defiant Jazz” office dance party, in which pink and white overhead panels illuminate a brief but casual descent in which the camera pans across the together. in a sensual swirl, almost as if it were one of the swinging participants. “When we shot this sequence, it was about doing things differently than what we were doing, because we really wanted it to be this unique surreal moment, if only for a minute,” Gagné said.

“Severance” has been renewed for a second season, and while Gagne said it’s too early to say if she’ll be working on it, she would love the chance to reteam with Stiller. “Ben really respects the cinematography,” she said. “I think it’s something he wanted to do even before becoming a director. He loves pictures and photography, and so do I.

Find out more about the Comedy and Drama number here.