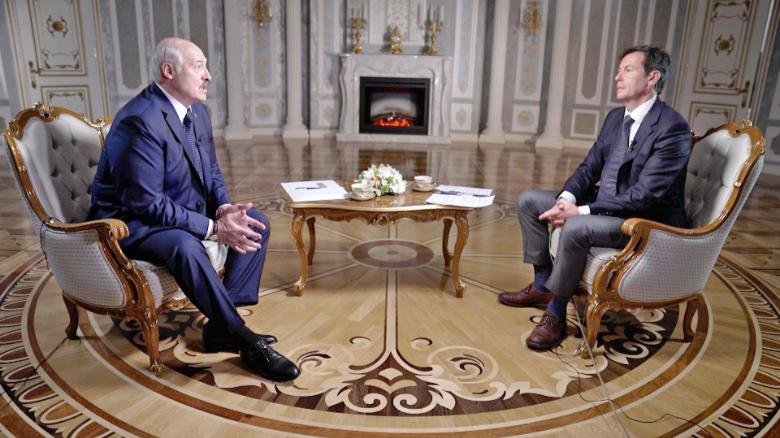 On September 30, Belarusian President Alyaksandr Lukashenka gave an hour and seven minute interview to CNN (President.gov.by, September 30). He agreed to speak on condition that the cable news channel publish a full recording of the interview, which he did. It is difficult to judge how those viewers who are not deeply immersed in Belarusian issues perceived the interview; but it seems that Matthew Chance, CNN Senior Moscow-based international correspondent fell into the well-known trap of underestimating Lukashenka. This impression does not pass any moral judgment on Lukashenka himself; rather, it reflects the mental agility and communication skills of the Belarusian leader. At the same time, on online social media, opposition-minded Belarusians unleashed an avalanche of harsh criticism against Chance, caused by the mere fact that he called Lukashenka “president” (Svaboda.org, October 1st).

Two days before Lukashenka sitting with CNN, a “black swan” event derailed any hope for normalization of the Belarusian political crisis – hopes raised last month (September) by an offer of international mediation (see EDM, September 29). But on September 28, the Belarusian KGB attempted to break into the apartment of Andrei Zeltzer, an associate of EPAM, Belarus’s largest IT company, and with dual Belarusian and American citizenship. Belarusian officials suspected him of terrorism, an accusation that seemed absurd to opposition supporters but entirely justifiable to Lukashenka supporters. The latter have, in fact, been led to believe such accusations by previously exposed incidents: as when Molotov cocktails were thrown into the windows of Oleg Gaidukevich’s apartment (Gaidukevich is the leader of a political party pro-regime and a staunch supporter of Lukashenka); the alleged perpetrators were subsequently arrested by the authorities. Zeltser owned a registered shotgun and was apparently ready to use it. The entire episode was videotaped from two positions inside the apartment, including by Zeltser’s wife. After Zeltser refused to open the apartment door, the KGB team stormed her; Once inside, Zeltser shot Dmitry Fedosyuk of the KGB, who later died of his injuries. Zeltser himself was killed by a retaliation (Mediazone, September 29).

The reaction to the accident showed the extent of the chasm between two parts of Belarusian society. While one party shared the patriotic mourning of a conscientious law enforcement officer, the other glorified the murdered computer scientist; hardly anyone deplores the two deaths. At the moment, it is almost certain that, numerically, these two sections of Belarusian society are at least on par. The latest Chatham House internet survey estimated the pro-Lukashenka party at 28% and supporters of the protest movement at 36% (Gazetaby, September 29). As repeatedly stated, any internet investigation is very likely to underestimate Lukashenka’s real base of support. The death of a KGB agent prompted harsh retaliatory statements from the authorities (Nasha Niva, September 29) and resulted in the arrest of dozens of people who apparently shared only one-sided sympathy for Zeltser and anathematized the regime online (Focus.ua, September 30). Authorities have also launched a (further) criminal investigation against Valery Tsepkalo, the former presidential candidate, for his videotaped glorification of Zeltser as a man who took up arms against the regime. Tsepkalo said other Belarusians should emulate the actions of the slain computer programmer because there is no other choice (Svaboda.org, Youtube, September 29).

Now is the second time that real hopes for normalization have been dashed: the Western decision to impose new economic sanctions in July ended the campaign to convince the de facto political prisoners to draft pardon requests which began at the end of June. These sanctions did not in any way generate additional repressions, but Lukashenka did not want to show weakness in the face of the renewed punitive measures of the West (Facebook.com/pavelmatsukevich, September 28), he therefore suspended the effort of grace. After the second consecutive derailment, the end of the political crisis again seems more distant than ever. In his CNN interview, Loukachenka made several statements in this direction.

So, at Chance’s suggestion that Lukashenka apologize to the Belarusian people, Lukashenka replied that he had no reason to apologize but, if need be, he would do so via the Belarusian media. Lukashenka insisted that conditions in Belarusian prisons are no worse than in the UK or the US and that human rights monitoring agencies often provide unsubstantiated information, as they l ‘did in Syria when, he asserted, the use of biological weapons turned out to be’ ‘wrong. “According to Lukashenka, there are no international human rights standards, only the ones the West wants to impose on the rest of the world. Human rights Lukashenka also referred to scenes at Kabul airport, with people hanging from the chassis of an American plane, to the accidental observation that passers-by in the streets of Minsk refused on several occasions to be questioned by him, supposedly out of fear, Lukashenka argued that ue the low credibility of CNN was at fault in the eyes of “our enlightened people.”

Lukashenka reiterated her previous statement that Svetlana Tikhanovsksya, the former presidential candidate, had not fled, but instead asked Lukashenka to deliver her to the Lithuanian border. In Lukashenka’s opinion, those who decided to engage in a revolution inside Belarus for Western money should have been prepared for any retaliation; and if they subsequently fled, it is only because they are crooks. When asked by Chance whether Lukashenka is ready to admit that the downing of an airliner on May 26 was an operation carried out by the Belarusian KGB, Lukashenka retorted that he was not going to admit anything because he did not under investigation. In addition, Lukashenka suggested to his interlocutor to watch his language and question the International Civil Aviation Organization (ICAO), whose representatives finally visited Belarus in June but have not yet shared the results. of their investigation. The Belarusian president also denied having organized illegal migratory flows to the European Union and pointed out that illegal migrants from countries looted by the West take many travel routes, with Belarus being only the one of the transit countries. And finally, in perhaps the most revealing statement from which to draw conclusions about the direction of the Belarusian political crisis, Lukashenka linked the end of his presidential term to the reestablishment of a sense of security after the alleged attempt of the West to introduce chaos.