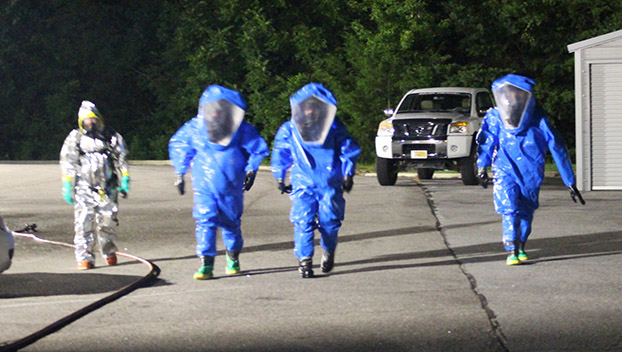 Farmville Emergency Communications received an alarm at the town’s sewage treatment plant on Doswell Street at approximately 8:13 p.m. on Tuesday, July 19. A chlorine gas leak was determined to have caused the alarm, said Matthew Fultz, assistant chief of the Farmville Fire Department. who was commanding the stage.

An emergency notification message was sent around 10 p.m. to residents living near the plant, primarily those on First, Second and Third Streets, asking them to stay indoors, sheltering in place. Another notification was sent around 11:25 p.m. advising preventive voluntary evacuation due to the unknown size of the leak before the arrival of the hazardous materials technician.

The chlorine, Fultz said, could be smelled from the facility up Doswell Street to the Prince Edward Rescue Squad building.

The Farmville Police Department went door to door notifying residents living near the plant of the ongoing incident and the voluntary evacuation to the Fireman Sportsman’s Arena on Zion Hill Road.

At approximately 12:07 p.m. Wednesday, hazardous materials technicians were able to enter and shut off all of the chlorine gas tanks.

The incident was flagged under control at 1:32 a.m. by a chemical company dispatched by CHEMTREC, a hazardous materials emergency call center. They determined less than 260 pounds of chlorine gas was leaking from the system, Fultz said.

The Environmental Protection Agency requires the reporting of chlorine leaks of 10 pounds or more.

The City of Farmville posted a statement on its Facebook page saying the leak was “small in scale” based on information obtained from the plant.

An emergency notification was sent around 2:45 a.m. to let area residents know it was safe to return home.

The area is completely clear now, Fultz said, and he didn’t feel anything after driving around this morning.

The leak was caused by an equipment malfunction, Farmville City Manager Dr. Scott Davis said. No injuries were reported, he said, but one person sought medical attention as a precaution not to come into contact with chlorine gas.

The Centers for Disease Control classifies chlorine as a “highly corrosive” chemical hazard to anyone exposed. The agency’s website says the risk includes contact with moist tissue, such as the eyes, skin, and upper respiratory tract.

Exposure can cause burns to the eyes, nose and throat, the CDC says, adding that coughing as well as constriction and edema of the airways and lungs can occur.

Chlorine is a yellow-green, noncombustible gas with a pungent, irritating odor, according to the CDC. It is a strong oxidizing agent that can react explosively or form explosive compounds with many common substances. Chlorine is heavier than air and can accumulate in low areas.