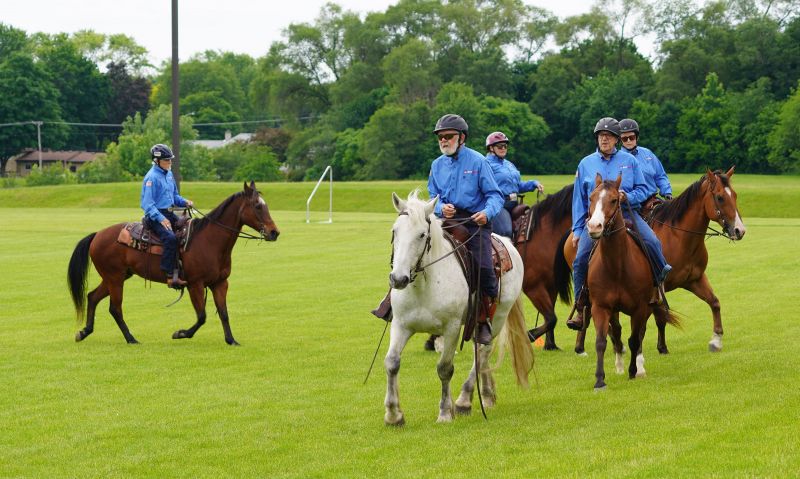 Finding a solution to the veteran suicide epidemic

Robert Dorn wants to refocus the conversation on veteran suicide. Instead of settling on the devastating number of 20 a day, the Vietnam War army veteran has a different number in mind.

“We want to be the one to start the conversation. Be the one who listens to a vet who has a problem. Be the one to help steer a family with a problem to what they need,” Dorn said, referring to the American Legion’s new Be The One program that aims to educate and empower veterans, their families, and civilians the means to act to save the life of a veteran.

As Senior Vice Commander of American Legion Post 171 in Crystal Lake, Illinois, Dorn took the initiative to reach out to local equine therapy organizations that work with veterans, first responders, and others struggling with PTSD and similar issues.

“We went there to see how we could be of benefit to them by reaching our veterans,” he explained. “After seeing what they were doing, it was pretty obvious that this was something we wanted to be involved in.”

Dorn, however, had a broader view.

The post created Vets 4 Veterans and Blue Families, a one-day program that began in June 2021 and was expanded for the June 11 event of this year. “The idea is to bring together resources that veterans and first responders weren’t aware of. The problem is that veterans don’t know what they are or what they do. We thought, ‘Why can’t we be this veteran’s navigator?’ »

Dorn went to work, reaching out to organizations that couldn’t say yes quickly enough. “I’ve been in sales all my life, and this is the easiest sale I’ve had. They told me they wanted to help but didn’t know how.

Post 171 orchestrated the event, which included the presentation of a Medal of Honor recipient, equine therapy demonstrations and approximately 40 vendors who provide services to veterans and others struggling with a disorder. post-traumatic stress and other problems.

The American Legion has long been a strong presence in the rehabilitation and support of our country’s veterans. A few years ago, the Legion introduced Buddy Checks as a way to support veterans who might need help but don’t know where to turn or are too proud to ask.

The Be The One campaign was created to raise awareness inside and outside the veteran community.

“Connecting with the veteran to get him involved in the program is really important,” Dorn said. “It’s not necessarily other veterans who are going to help you right away. Your family members know what is going on. Aunts, uncles… This wave of suicide would affect them all. If they can understand what Be The One means, they can help refer the veteran to a therapist or someone else who can help. Everyone benefits. This is a huge win for the community. A big win for the family. A huge victory for the veteran.

In the eyes of the commander of post 171 Charlie Morgan, the mission is to educate their entire community, west of Chicago. It’s not enough to say “Thank you for your service,” said Morgan, a Coast Guard veteran who served in the Vietnam era.

“I want people to know that these people are suffering, whether they are female or male veterans. And their families are suffering. I want to raise awareness and show that there is help out there.

And that help can come in the form of just one person. A phone call. An offer of help.

“As an American Legion post, we are here alive and well and want to help you and let you know we are here to help,” Morgan said. “It only takes one person to go and say, ‘Hey, you have a problem, go get some help, we need you.’ We have to take it upon ourselves to fix the problem. You must be that one person. You must stand up and say, ‘I will help you.’ »

PTSD and veteran suicide do not discriminate. Veterans of all war eras are sensitive. Even those who receive the highest national honor for their bravery.

Among the speakers at the Post 171 event was Medal of Honor recipient Allen Lynch. A Vietnam War veteran, Lynch shared the challenges he faced coping with his post-traumatic stress disorder.

He described an otherwise normal day when he rode the bus home from his job as a benefits counselor at a VA hospital. “Not thought of Vietnam when it came to post-traumatic stress.”

Arriving home, a thunderstorm suddenly erupted and lightning broke the calm. Lynch experienced flashbacks. He hit the ground. “My wife said I had the weirdest look in my eyes,” he recalled. “This started. It was a roller coaster ride. … Anger. The Depression. Survivor guilt. I feel sorry for myself.

Episodes of alcoholism, physical altercations, and suicidal thoughts occasionally took over Lynch’s life. At other times, he mentored Boy Scouts, coached baseball, and took the family on camping trips.

Over time, the demons grew stronger.

In the early 1990s, Lynch wanted to get off the roller coaster. He refused VA medication because “I didn’t want to be addicted to pills for the rest of my life.”

The council helped Lynch out of obscurity.

“PTSD makes us withdraw into ourselves. It’s about how I feel, what I want, what’s going on with me,” Lynch said, adding that he used his diagnosis as a way to explain his behavior. “It takes all the blame away from us and puts it on this little friend we call post-traumatic stress.”

Lynch reversed course when he began to empathize and understand how his actions affected those close to him. Another defining moment occurred when he visited the Punchbowl at Pearl Harbor. He realized that what he had – a loving wife and family, a great job, freedom – was unattainable for those whose names are etched on the wall.

“The duty we have as veterans and first responders is to live the life that was taken away from all our brothers and sisters who never returned home. They would like to have what we have.

It’s not just veterans who may need support during dark times. Those currently on active duty, those in the reserves and others are also at risk.

Army Reserve Lt. Col. Jennifer Miller, who also presented at the Post 171 event, has been on the front lines of reducing stigma and preventing suicide.

Miller is about to retire from her Suicide Prevention Liaison role with the 84th Training Division at Fort McCoy, Wis. She trains other Soldiers to identify peers who may be having thoughts of suicide and works with senior leaders to create an environment where asking for help is acceptable.

“We focus on intervention skills. We have integrated various programs into an intensive three-day training course that teaches these skills in a very non-traditional way. It’s very interactive.

Topics include mindfulness, spirituality and more. She estimates that 200 soldiers a year go through the train-the-trainer program.

“They go back to their units and we give them a training support package. There they can talk about suicide, what are some of the warning signs. What resilience skills can you use? Hopefully this will trickle down.

“It’s much more prevalent now,” Miller said, comparing the frequency of procedures today versus when it started seven years ago. “I am retiring after 30 years in the military. Even 15 years ago, no one would have spoken. It was such a taboo subject.”

Looking ahead, Dorn sees the post branching out to focus on initiatives for female veterans. A special walk will take place in a few months and other projects are underway. This is part of overall outreach and efforts to connect with veterans, all in the name of providing resources, camaraderie and support to end the stigma.

Although well over 100 people attended the recent event, Dorn isn’t interested in measuring success by attendance numbers. Instead, it’s a goal directly tied to the effort to be the only one.

“It’s hard not to get caught up in the numbers,” Dorn said. “How many vets showed up? Sometimes it’s not what you anticipate. I learned a long time ago, this is the one. Be The One is really the key. If you help that one, then you help his whole family. This is how we measure our success.