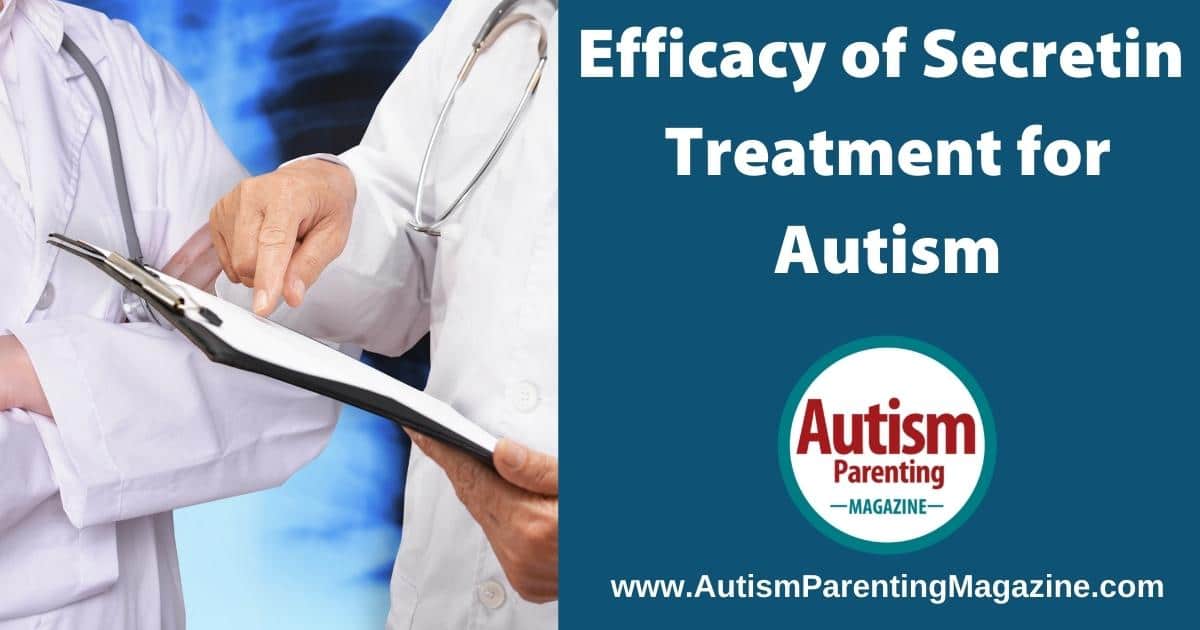 Effectiveness of secretin therapy for autism

Discoveries about the biological treatment of autism symptoms are multiplying and are hot topics for parents looking for solutions to help their children. One area that scientists have been studying for a few years with limited success is secretin as a treatment for symptoms of autism spectrum disorders (ASD).

The first study on the use of secretin for symptoms of autism was conducted in 1998 and since then many scientists have studied it in the hopes that the hormone might be beneficial for children with autism.

This article turns to research to find out whether secretin can actually be used as a treatment for some of the difficult symptoms associated with autism.

To understand the possible use of secretin for autism symptoms, it is first helpful to gain a general understanding of autism spectrum disorders (ASD).

Children with autism are each different with a unique set of symptoms and no single cause or reason behind autism has been established. For this reason, biological, physiological, neurological and genetic experts are actively engaged in research to hopefully find answers that aid the daily experiences of people with autism and their families.

Secretin is a gastrointestinal hormone (GI hormone) that was first seen in 1998 as a potential treatment for symptoms of autism.

Secretin essentially has three main functions: namely the regulation of gastric acid, the regulation of pancreatic bicarbonate and osmoregulation in the duodenum (the part of the small intestine that connects the stomach) (DiGregorio & Sharma, 2021 ). Let’s break this down further:

This function is the most critical role of secretin. Stomach acid stimulates the release of secretin which enables motility in the duodenal lumen. In turn, secretin causes more secretion of pancreatic fluid rich in bicarbonate. This process then neutralizes gastric H + (plays a role in fat digestion by creating a pH neutral environment). The fatty acids of the duodenum also regulate the secretion of secretin.

Maintaining a constant water balance (homeostasis) helps ensure that the balance between water intake and excretion from the body is regulated. This is called osmoregulation and this process is essential for maintaining the electrolyte balance of an organism.

Skipping over the complicated reason why secretin plays a role in osmoregulation, all we really need to remember is that when the cell’s receptors sense high osmolality (osmotic concentration), secretin is released. This causes the release of vasopressin (regulates the ability of the fluid around the cell to cause the cell to gain or lose water (tone) in the hypothalamus.

What is secretin therapy for autism?

Many believe that there is a link between autism spectrum disorders and gastrointestinal disturbances and bowel difficulties. Many children on the spectrum have been shown to have feeding problems and seem to respond better to an anti-inflammatory diet.

In 1998, the efficacy of secretin as a treatment for autism was first demonstrated in studies (Arehart-Treichel, 2002 & Williams, et al. 2012). Studies at the time found that children who had gastrointestinal upset, as well as symptoms such as those seen in autism, had an improvement in their ASD symptoms. After receiving secretin, a change in behavior was observed, such as improved eye contact, alertness and language.

As a result, secretin treatment for autism became popular, but many subsequent studies failed to replicate the study result. The first scientific study to test whether or not secretin injections help children with autism was published in 1999 (Arehart-Treichel, 2002). The results did not conclude that intravenous secretin (delivered through the veins) helped children with autism perform better.

The discovery came after a few test batteries consisting of behavioral tests, including the Autistic Behavior Checklist, were performed. Results compared participants who received the dose of secretin and those who received the placebo saline injection. Three subsequent scientific studies were published on secretin and, like other studies, did not find positive results.

Even the study by Molloy et al. (2002) did not confirm the initial hypothesis that the study “found no significant difference between treatment with secretin and placebo”. At present, research on this subject is still in progress.

What hormonal deficit is associated with autism?

Autism spectrum disorder is a neurodevelopmental disorder or condition with many possible causes, including hormonal imbalances. According to Abozaid et al., There is some evidence that children with autism altered plasma levels of growth hormone (GH) and ghrelin.

These two hormones play a role in the integrity of the mucosa, which is important for immune tolerance. Additionally, ghrelin also regulates the neuroinflammatory (inflammatory) response in the brain or spinal cord) and apoptotic processes (a form of controlled cell death) (Abozaid, et al. 2020). If any of these processes are abnormal, they could be linked to the pathogenesis of autism.

How is secretin administered?

Secretin is found naturally in the body of mammals, but when studied for research purposes, secretin is given intravenously (through the veins).

In 2001, Dr. Thomas Owley, assistant professor of child and adolescent psychiatry at the University of Chicago, administered an intravenous dose of porcine secretin as well as an intravenous dose of physiological saline to 56 elderly children with autism. from three to 12 years old. The study found inclusive results, similar to many other studies. This study and many others have historically administered secretin intravenously to assess its effectiveness in treating symptoms of autism.

It is not yet known whether secretin plays a role in treating the symptoms of autism. Perhaps in the near future, as new discoveries are made, secretin could very well be used as a treatment for autism and other neurological disorders.

All we know so far is that secretin was initially (in 1998) considered a potential intravenous treatment for symptoms such as speech and behavior difficulties seen in autism spectrum disorders (ASD). .

Biological studies have made great strides in research dating back centuries, so there is hope that one day secretin will have its place. At the moment, early intervention therapy is what is generally recommended as support for young people with autism.