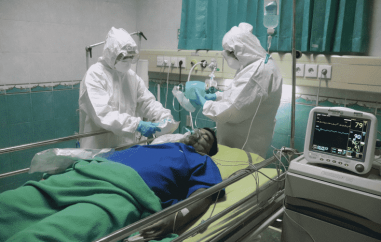 Costs in millions due to Covid treatment for the unvaccinated

Treating unvaccinated covid patients costs millions. Economists have now warned of the immense costs to the health care system. As Die Welt reported on Friday, calculations by the Kiel Institute for the World Economy (IfW) have shown that medical treatment of the unvaccinated has cost at least 120 million euros since July.

The calculations were based on data from the Robert Koch Institute (RKI) and the average hospital treatment costs for Corona patients of 10,200 euros reported by AOK. This translates into costs of around 20 million euros for July, 70 million for August and 30 million for the first two weeks of September, which were occasioned by the treatment of unvaccinated adults in hospitals. According to the IfW, the sharp increase in August is mainly due to the higher incidence of infection.

According to the report, however, the actual costs could be considerably higher. According to the IfW, this is due on the one hand to the subsequent correction of the rate of hospitalization by the RKI, the figures being corrected upwards by a third on average after a few weeks. In addition, the average costs of a hospital corona disease may underestimate the actual costs. In addition, long-term indirect damage could result in costs. However, these cannot yet be calculated.

Long-Covid: Rehabilitation and consequential damage is a burden on the health system

According to the World Report, the president of the German Hospital Association, Gerald GaÃŸ, also referred to the consequent high costs due to severe illness of the disease: “For covid patients treated intensively, we assume a rehabilitation rate by almost 100 percent. ” There are indications that collateral damage will continue to occupy the health care system. Although the exact data on the follow-up treatment for Corona patients is not yet available, he said. “However, it can be assumed that practically all patients will continue to be cared for by doctors in private practice after their stay in hospital,” GaÃŸ told Die Welt.

But it’s not just the immediate treatment costs that weigh on health insurers. “In addition to the costs of the health care system, the pandemic continues to entail high economic costs,” Gabriel Felbermayr, president of IfW Kiel, told Welt. â€œUncertainty is slowing consumption and investment. If government constraints remain in place due to the pandemic and people remain apprehensive, the economic costs are so high that almost any government investment in containment and prevention of the disease. pandemic is worth it, â€Felbermayr said.

How to make a shampoo-free window tint solution for baby