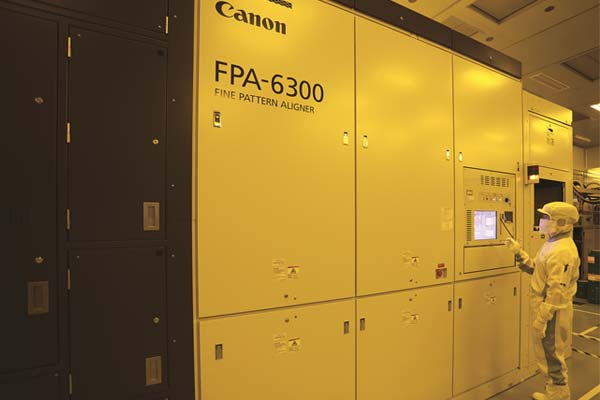 An FPA-6300ES6a system operating in a factory

Along with the demand for solid-state devices, the demand is growing for solid-state lithography equipment that offers increased levels of productivity. Since the launch of the FPA-6300ES6a KrF scanner in April 2012, Canon has continuously developed productivity-enhancing options, available as upgrades for existing units that have earned accolades and a reputation for high reliability on the market. When equipped with the new Grade 10 productivity upgrade option, the FPA-6300ES6 achieves productivity levels of 300 WPH. Additionally, the company plans to release an upgrade in 2023 that will allow the FPA-6300ES6a to support 200mm wafers as well.

Upgrade can be installed on users’ existing FPA-6300ES6a6 systems currently in use in mass production factories. Since no replacement is required, productivity can be further improved.

By continuing to offer a wide range of productivity-enhancing solutions and upgrade options for its solid-state lithography systems, Canon is meeting the growing productivity needs of users.

The Year 10 Productivity Upgrade option will be available beginning in early August 2022.

Semiconductor lithography equipment that uses the “stepping and scanning method”, which involves the simultaneous movement of the reticle stage and the wafer stage, are commonly referred to as “scanners”. Although the overall system is more complex, scanners are able to cover the entire exposure angle through the scanning process. This allows for the design of a smaller lens, resulting in less aberration and distortion, thus simplifying the manufacturing process. This in turn results in greater exposure accuracy.

Canon manufactures a wide range of solid-state lithography systems, including systems using KrF and i-line light sources, to meet a wide and growing range of customer needs for systems designed for field production large or small substrates as well as the production of devices for the Internet of Things.
https://global.canon/en/product/indtech/semicon/